Anything But Minor is Kate Stewart’s latest offering. After reading and enjoying Loving The White Liar (We even get a brief cameo of the couple of that book in this one) I knew that I had to add this book to my neverending “TO-READ” list…

“The woman had managed to piss me off twice since I met her and had made a fool of me. Oh yes, there would be fucking” 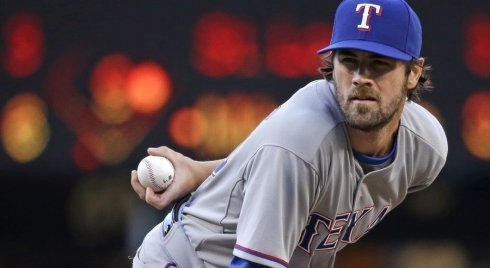 Alice left Ohio and her mother’s overbearing attitude to strike out on an adventure and finally be the Alice she was meant to be. Everyday she discovers something new, which leads her to a baseball game and Dutch. Mistakenly sitting in Dutch’s dead husband’s seat a friendship is built which leads her to one sexy as sin pitcher Rafe Hembrey. Rafe is a bit of a playboy and not someone Alice dares to get involved with. Alas, fate has other plans and soon the sparks are flying between these two….

“Well, have faith, Rafe. If a fourteen-inch seahorse can be monogamous, I’m sure there’s hope for you.”

I enjoyed this one a lot. Alice was one of the best heroine’s I have read in AGES. She was funny, and quirky (without being annoying) She had self respect and didn’t just fall into Rafe’s crotch the minute he said “hello” She really made the book for me. Rafe I liked a little less than Alice. It took me a little time to warm to him. He was a player, and to be honest I am getting a little tired of the whole “sports hero player gig” that seems to be in almost EVERY sports romance written lately.

As much as I did enjoy this one, it did lose a star and a half for a few issues I had. There is a scene that annoyed me that involved another woman. Normally I don’t concern myself with wondering about things that don’t happen on the actual pages of the book (why bother right? If it was important to the story it would be included) That said there is a scene where Rafe leaves Alice to apparently go play “naked poker” with a woman whose ass he slapped earlier in front of Alice. The reason why I felt we needed clarification on whether he went back and played with the OW or not was because he was trying to present a non-player facade to Alice and if he did indeed go and play naked poker than he loses some points in my eyes for continuing his player ways while claiming to want Alice.

Another thing that made NO SENSE to me was the whole “Kristina” situation. Until 80% of the book I never got an inkling that she was in love with Rafe. Even when her and Alice have a conversation about Rafe and whether they have ever slept together, she says she is hung up on “someone else” Even when Andy was angry at Rafe because he has a thing for Kristina, I was SURE she was in love with someone different and Andy was wrong. In FACT I actually thought she was in love with Andy. Then BAM, at 80% she is declaring these feelings of love. It just seemed SO unnecessary since she was Alice’s friend and never caused any tension or trouble over the course of the book. I honestly am still scratching my head over the whole point of that plotline. Lastly the whole revelation about Dutch was a little too out of left field for me. I mean one would think SOMEONE would have brought it up before the very end of the book. I am not sure why it needed to be this big secret.

So I know it sounds like a had a lot of problems with this one, but all those mentioned above where just annoyances in the big picture. I really did enjoy this one, and I really do enjoy this authors writing. I laughed my butt off SO many times. A hearty two thumbs up…