Title: Assassin’s Mark
Series: Assassins #2
Author: Ella Sheridan
Genre: Romantic Suspense
Release Date: June 24, 2019
~SYNOPSIS~
I knew the minute I saw him that Levi Agozi was too perfect to be real. I didn’t care. He came to me, asked for me, and, dazzled by his dark good looks and the bad-boy aura surrounding him, I gave in. Willingly.
My father is set to become the next governor of Georgia, and he’ll use me to get there if he has to. He’ll hand me over, virginity and all, to the man with the biggest bank account and political pull.
I wanted something more.
I wanted Levi. And I had him—until I woke up, disoriented and confused, at his mercy. He’s a bad boy, all right. A sexy, deadly assassin. And I’m the pawn torn between him and my father, two powerful men intent on destroying each other.
I might not understand their war, but I do understand one thing: no matter who wins, I lose.
ADD TO GOODREADS

~EXCERPT~
“Get your ass outside right this minute, Abigail, and wait for Charlie to arrive. I won’t have you shaming this family.”
I was bringing shame to our family? Me? My father expected me to marry for his convenience, for the good of his political career, but I was the shameful one? I squeezed down on the cell, the sound of plastic creaking in protest satisfying something inside me that ached to burst free. Too bad I wasn’t strong enough to pulverize the damn thing.
And yet, a large part of me believed him. Always had. After all, if I wasn’t shameful, he would love me, right?
No. Wrong. You’re not going to let that bastard poison you anymore, Abby.
I wasn’t the Hulk, able to crush a cell phone with a single twitch of my fingers, but I was strong enough to drop it into the trash can full of wet paper towels and walk out of the bathroom without looking back. In the hall, the sight of Levi leaning against the wall, obviously waiting, hands stuffed into his pockets, brought me to an abrupt stop. My mouth went dry. I’d spent my life trying to please a man, and look where that had gotten me.
I was already bringing shame to the Roslyn name; maybe I should embrace the role instead of letting my father’s words cut me to pieces.
I moved closer. One side of Levi’s mouth tilted up, and he wrapped those big hands around my hips the minute I came within reach. A gravelly rumble escaped him, sinking beneath my skin and sending shivers to the deepest part of my being. Heavy-lidded eyes devoured me, shouting a desire I found hard to believe, but it was there nonetheless. Hunger. Pleasure. That look sent a surge of desperation so strong through me that I couldn’t speak if I’d wanted to.
It’s now or never, Abby.
I didn’t stop or slow. I moved into his space until my body was pressed firmly against his, lifted my chin, and met the lips that lowered to mine.
– – – – – – – – – – – – – – – – – – – – – – – – – – – – – –

After finishing the short prequel (THE ASSASSIN) I was looking forward to diving right into this book. And I liked it….mostly. (lol) The writing was decent. It is a relatively fast read (under two hours) so the pace moves along quickly. The plot was intriguing. I loved the close bond all the brothers had. The sex was hot. There was no OW or OM drama. However, I wish we had gotten some confirmation on whether Levi slept with any other women during the separation. I don’t *think* he did, but it is never outright said, and it always annoys me a little when we are left in the dark. (lol) 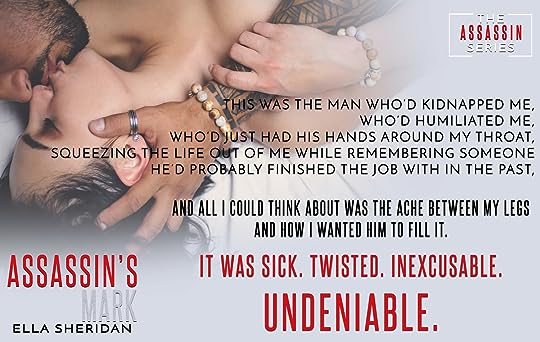 Both main characters were likable enough. I can’t say I was overly enamored with Levi. I couldn’t quite get passed what he did and how he treated Abby at the beginning. For “ME” it was a bit too much. He took it a bit too far, and I found it hard to warm up to him after that. He got better as the book went on, but it would have been nice for him to at least frigging apologize because Let’s be honest here what he did with the photos crossed some serious lines. Abby I liked, mostly. I wish she hadn’t been a virgin because I am f-cking OVER virgins at this point, but it seems there is no escaping them. (lol) I also would have liked her more had she held out before falling back into bed with Levi. It made her a little of a doormat in my opinion. Overall, though she wasn’t a bad heroine. Last, it all wraps up on a happy for now cliffhanger. I enjoyed it enough that I will continue on to book two.

Title: Assassin’s Prey
Series: Assassin’s #3
Author: Ella Sheridan
Genre: Romantic Suspense
Cover Design: Mayhem Cover Creations
Release Date: July 22, 2019
~SYNOPSIS~
I killed my first man at the age of twelve. I’ve been killing ever since. I thought it was all I lived for…until Abby. Until the woman I’d kidnapped became the woman I couldn’t walk away from.
She owns a piece of me I wouldn’t take back, but the rest? The only way to protect her is to hold back the parts inside me that are too ugly to ever reveal. I’ll keep her safe, even from me.
And it works. We have the nights, and I hunt my way through the days. Alone.
Until an attack reveals a threat we didn’t see coming. One that could take away the dream I didn’t realize I had.
Everything. With her.
I’m on the hunt of my life. My prey might run, but in this fight—for her, for us—they don’t stand a chance.
ADD TO GOODREADS

This was probably the sweetest (and shortest) book I have ever read by K. Webster. In fact, it was so short I don’t even know what to say about other than I enjoyed it. *shrug* It was sugary sweet. There …READ MORE

Do you like the forbidden? Regretfully Yours by Sunniva Dee IS AVAILABLE NOW! Only 99c for a limited time!     ~PURCHASE~ Amazon → https://amzn.to/2qqfJfc FREE with #KindleUnlimited “It’s official—Sunniva Dee is the queen ...READ MORE

Rewrite the Stars By Charleigh Rose