~PRAISE FOR THE NOVEL~
“Wow, what a beautiful book! It’s a gorgeously slow-burning second-chance-romance that is sweet, passionate and functional with ALL the feels, and I loved every moment of it.” ~ Amazon Review

“The best kind of angst, deeply moving emotions, and true love all come to play in a beautiful story of redemption and forgiveness with Beautiful Lies.” ~ The Red Hatter Book Blog

~SYNOPSIS~
Gifted artist. Drug addict. A beautiful liar with the soul of a poet.
Connor Vincent.
Once upon a time, my foolish heart believed that my love would be strong enough to fix him.
How very wrong I was.
We soared to the greatest heights and crashed to the lowest depths together.
Starting over wasn’t possible.
Yet here he was, heart in hand, asking for another chance.
Only a fool would agree.
But when it comes to Connor, I’ve always been a fool.
My muse. My bluebird of happiness. The cunning thief who stole my heart.
Ava Christensen had been the best thing in my life, but I ruined us.
One more chance to get it right.
I would show her that I’ve changed. I’m not hell-bent on self-destruction anymore. I won’t be careless with her. Not again.
This time everything will be different.
But once again my past catches up to me, and I’ll have to prove that I’m stronger than my addiction. Stronger than my secrets and lies. Strong enough to be the man she deserves.
No more secrets. No more lies.
They say that truth is beauty … they’re lying.
Beautiful Lies is the second book in The Beautiful Series but can be read as a complete standalone. 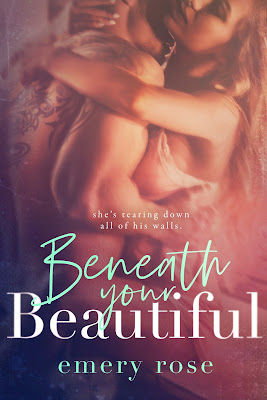 Emery Rose has been known to indulge in good red wine, strong coffee, and a healthy dose of sarcasm. She loves writing sexy alpha heroes, strong heroines, artists, beautiful souls, and flawed but redeemable characters who need to work for their HEA.
When she’s not working on her latest project, you can find her binge-watching Netflix, trotting the globe in search of sunshine, or immersed in a good book. A former New Yorker, she currently resides in London with her two fabulous daughters and one grumpy, but lovable Border Terrier. 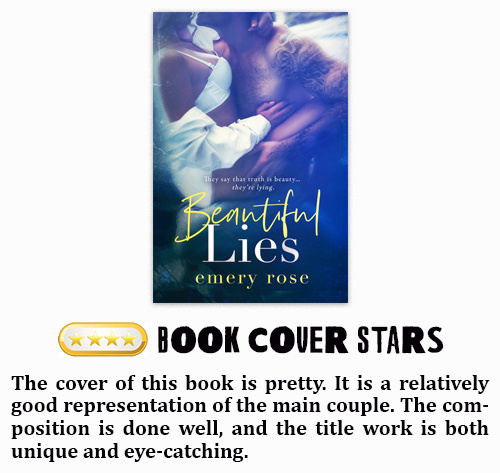 ~WRITING – PLOT – PACE~
So this turned out to be quite an enjoyable little book. I had originally signed up for it because after reading the blurb I thought it would be a good candidate for my “stepping out” challenge. It sounded like it would be messy, angsty, and full of things I usually avoid like the plague. Especially considering the subject matter (drug addiction). Surprisingly, it wasn’t very angsty at all. *shrug* However, I didn’t find this a disappointment in the least. It was very well written. It was well paced, and I never grew bored or felt the need to skim. It is told in a dual POV format, and we also have some jumps back and forth from past to present. This can be problematic sometimes for me, but it worked very well in this case. Plus, the book isn’t bogged down with them. The plot was engaging, sweet, and heartbreaking at times. I would have liked to have seen a bit more of Connor and Ava’s relationship over the course of the ten years. I just couldn’t completely feel Ava’s pain because when the book starts Connor has been clean eighteen months (I think). I am going to assume we maybe see more of that type of thing in the first book? Last, this was all wrapped up in a decent happy for now.

~HERO~
CONNOR…Connor was pretty much the perfect book boyfriend. He was sweet. He owned his mistakes. He was trying to get his shit together. My heart ached for all him and Killian had been through, and his love for Ava knew no bounds. I loved him.

~HEROINE~
AVA…I loved Ava just as much as Connor. I was expecting a heroine that pushed away a lot, but she opened her arms as a friend and then more, pretty quickly. She was also feisty. She was strong. She was sweet, and she loved Connor even when he couldn’t love himself.

~SECONDARY CHARACTERS~
This book wasn’t too heavy on secondary characters. Killian and Eden (the couple from book one) being the two primary ones. That said, I am super interested in Tate. As well as Kiera, and Zeke.

~HEAT LEVEL~
LOW. This wasn’t an overly spicy book. We get a couple of sex scenes, but they were milder in nature, but it worked.

~ANGST LEVEL – SEXUAL HISTORIES~
LOW…again, I was expecting something a bit more angsty here. As to sexual histories, well I am a bit confused on this matter myself. Connor and Ava had known each other for ten years. First as friends from the ages of 14-16, then as boyfriend and girlfriend until she broke up with him 18 months before this book started. They were each other’s first, and I assumed that from 16 years of age until they broke up they had been a couple with no sexual encounters with other people. Now, when they break up the heroine does move on and has a f-ck buddy (Zeke — They end things quite quickly at the start of the book), and the hero stays celibate. What confuses me if that they have the “condom” talk and both mention they have always used condoms with other people. So I can only assume that over the course of those eight years they were an on and off couple with each sleeping with other people? Again, perhaps this information is more clear in the first book of the series? In any case, there wasn’t really any OW or OM drama (Zeke don’t count since he was a nice guy and didn’t cause any issues for the couple).

~IN THE END~
Did I enjoy it? Yes.
Was it perfect? Almost. I wanted a little more angst and emotion in regards to Connor’s addiction and how it affected Ava over the years.
Would I recommend it? Yes, undoubtedly. That said, although this could technically be read as a standalone it would be MY recommendation to read book one first. I have a feeling that there is a lot of backstory pertaining to this couple in that book.
Who would enjoy this book? Readers who don’t like a lot of drama or angst.

Coming February 24th   RipleyThey call me RIP. I’m a killer. A murderer. A psychopath. In the eyes of the righteous, I’m a monster, born of sin and depravity.I want to protect her, but I’m not a good man.I …READ MORE

Stepdaddy Savage is a smutty Taboo novella featuring an over-the-top alpha. Read at your own risk You do not say no to Graham Savage, because Graham Savage doesn’t ask. Just like his name suggests, he takes, and right now, he …READ MORE

Bound to the Bounty Hunter (Bound #1) by Hayson Manning

BLURB Harlan Franco, Colorado’s busiest bounty hunter, and security expert, lives by his rules: be in control, be detached, and never touch the asset. These rules are tested when the asset he’s being paid to secretly guard is none other …READ MORE

SALES BLITZ — The Storm and the Darkness by Sarah M. Cradit

Title: The Storm and the Darkness Series: The House of Crimson and Clover Series Prequel Author: Sarah M. Cradit Genre: Paranormal Romance Release Date: May 2015 Ana Deschanel made a terrible mistake. The only chance of ...READ MORE

Title: Chasing The Dark Author: Kassidy Carter Genre: Romantic Suspense Release Date: TBA SYNOPSIS When all you have is darkness the only thing left to do is chase it. My life is a lie. People ...READ MORE