Today we are celebrating the release of AIDEN, the second book in the Vested Interest series by Melanie Moreland.

Check out the teasers and buy links below.

~MEET THE MEN OF VESTED INTEREST~

Their pasts dictate the men they are, but their present shapes their future.

What happens when these men meet the one person they are destined to be with? Can they fight their feelings and walk away? Or will they each succumb and learn the sweet agony of love?

Add it to Goodreads

Aiden
Haunted by memories of his past, Aiden plays the part of the happy-go-lucky friend. Always ready with a teasing smile or a joke, he is good at hiding his pain.
Using his impressive physique as a shield, he keeps his past buried beneath his rugged exterior.
Except, one woman sees through his façade.
Her green eyes see too much, even as her body tempts him.
Even as his heart yearns for her.
Cami is determined to make him realize that he is worthy of being loved.
He pushes her away at every turn, yet finds himself unable to keep her at arm’s length.
Who will win this battle of love?

Coming August 2018! Add it to Goodreads

New York Times/USA Today bestselling author Melanie Moreland, lives a happy and content life in a quiet area of Ontario with her beloved husband of twenty-seven-plus years and their rescue cat Amber. Nothing means more to her than her friends and family, and she cherishes every moment spent with them.

While seriously addicted to coffee, and highly challenged with all things computer-related and technical, she relishes baking, cooking, and trying new recipes for people to sample. She loves to throw dinner parties, and also enjoys traveling, here and abroad, but finds coming home is always the best part of any trip.

Melanie loves stories, especially paired with a good wine, and enjoys skydiving (free falling over a fleck of dust) extreme snowboarding (falling down stairs) and piloting her own helicopter (tripping over her own feet.) She’s learned happily ever afters, even bumpy ones, are all in how you tell the story. 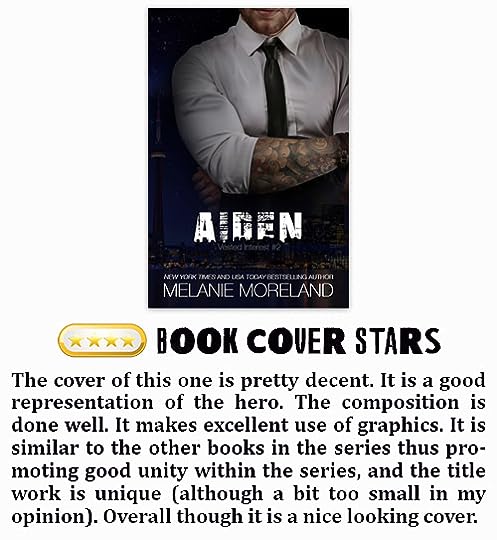 ~WRITING – PLOT – PACE~
I was a bit disappointed in this one. It wasn’t nearly as good as BENTLEY in my opinion. I just didn’t like either of the main characters. Aiden was a whiney a$$hole that treated Cami like trash. Cami was the worlds biggest doormat that would have licked Aiden’s shoes for a smidgen of affection <— OK yes, I am being a bit overdramatic, but that is how it felt to me. It didn’t help matters that the above scenario drags on for 75% of the book! That issue aside, I do enjoy this author’s writing style. It has an easy-to-read flow to it. The pace was very good (maybe a little rushed at the end). The plot was pretty engaging. Although it was super obvious who was causing trouble from the start. Maybe it was supposed to be obvious. *shrug* Last, it was all wrapped up in an OK ending. Like I mentioned above, I thought the ending felt rushed. Aiden doesn’t get his head out of his a$$ until 75% and the book ends at 98%. I didn’t feel like there was enough groveling on his part before everything was all “tiptoeing through the tulips forever.”

~HERO~
AIDEN…I just didn’t like this douche. Oh, he had some sweet moments, but the way he treated Cami was abysmal. I don’t care if she knew the score and agreed to sex only. He KNEW she had feelings for him. He KNEW she wanted more. He continuously acted like he had feelings for her just to toss her aside like trash. And don’t even get me started on his whining about his childhood. I must be in a super b!tchy mood today because instead of feeling sorry for him I wanted him to grow a pair of f-cking balls and do something to deal with it.

~HEROINE~
CAMI…OMG Cami was a doormat extraordinaire. She continually allowed Aiden to screw her and then toss her aside. He continuously told everyone she meant nothing, and it was just sex. The one time she ends things (right after he humiliates her for kissing him in front of their friends because it was against HIS rules) she ends up RIGHT back in his bed two days later. Where yet AGAIN he treats her like crap. Now, outside of her relationship with Aiden, I did like her character. She was a great friend. A great sister.

~SECONDARY CHARACTERS~
The secondary characters in this one are pretty much the same as they were in book one. We get a lot of Bentley and Emmy. As well as Dee and Maddox <— their book is up next but I am on the fence because the premise sounds awfully similar to this book…”Fuck buddy arrangement until someone wants more.” Plus it is an older woman/younger man scenario. I just don’t think I have it in me to go through another “it is just sex” back-and-forth story.

~HEAT LEVEL~
Surprisingly low. There was barely any sex in this one. Maybe a couple semi-hot scenes. That said, it didn’t affect my rating at all. In fact, I hadn’t even really noticed the lack of sex until I was almost done the book. Go figure.

~ANGST LEVEL – SEXUAL HISTORIES~
Medium. Honestly, the back and forth and hot and cold attitude Aiden had through three fourth of the book caused most of the angst. Neither were virgins, and I don’t think either had slept with anyone in a while. There was no OW or OM drama.

~IN THE END~
MEH…Everything apart from the relationship between the two main characters worked for me. I just couldn’t get past my dislike for both of them. I am chalking it up to me being in a mood. (lol) Maybe if Aiden had gotten his head out of his a$$ sooner, or maybe if Cami had grown a backbone and stuck with it I would have enjoyed it more. But as it was, it just missed the mark for me. It happens. I am sure many people will love it (as they should). Therefore yours truly can’t give this any more than three generous stars.

Love With Me By Kristen Proby

Love With Me by Kristen Proby Series: With Me In Seattle Series #11 Release Date: November 27, 2018     ~SYNOPSIS~ From New York Times Bestselling Author, Kristen Proby, comes the latest in her ...READ MORE