Prelude in the American Gods series.

Young. Wealthy. Elite. Attractive. The gentlemen’s secret society at Yale was filled with them.

And Nathaniel Radcliffe, the bane of my existence, was one of them.

As the right hand of the American Gods, he was conceited and arrogant. A dangerously handsome man in a tailored custom suit and shiny black oxford loafers.

The classroom was our battlefield. We made a sport out of arguing and debating, ready to do anything in order to win over the other.

I’d sworn I’d never give him the upper hand, until…

The secret I’ve been hiding for the last three years?

He just discovered it…and now he has all the power.

Add to Your TBR – https://bit.ly/2GzvnfM 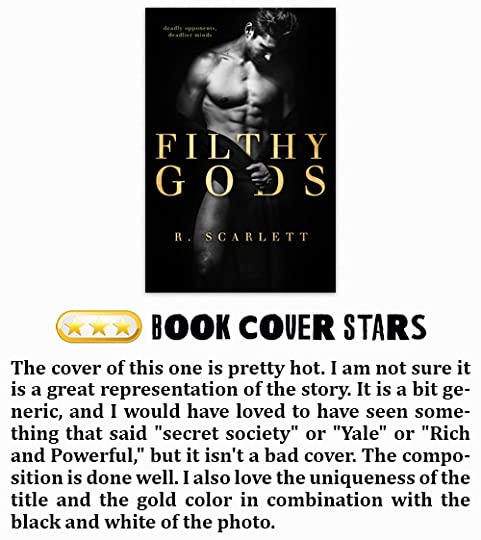 ~WRITING – PLOT – PACE~
Wowza…this book was SO good. A fantastic start to a very intriguing new series that was very nearly perfect. The writing (as is always the case with this author) was excellent. It is a fairly short book that took me about an hour to read. It moved along at a good clip. The plot was super engaging, and the ending was sweet. Now, I said NEARLY perfect. Personally, I would have preferred this book be a full-length novel. I would have liked to have seen some of their school interactions, and the romance is a bit rushed with some time jumps that cover the Summer. I would have also liked to have seen more story from Nathan’s POV. We really only get one chapter right at the end from his POV. Both those were just minor issues which only affected my rating slightly.

~HERO~
NATHANIEL…I quite liked Nathan. He was sexy. He was smart. He was sweet. He was cocky. He was arrogant. He was all about Juliette. He was a pretty damn near perfect book boyfriend.

~HEROINE~
JULIETTE…Juliette was also a very likable character. She was smart. She was feisty. She was strong. She worked her butt off. I love how she held her own with Nathan.

~SECONDARY CHARACTERS~
This one wasn’t heavy on secondary characters, but we do get introductions to the other American Gods players. I think I am most intrigued by Arsen, the broody tattooed Russian.

~HEAT LEVEL~
Medium. There are some suitably spicy sex scenes in this one. It was maybe slightly tamer than I anticipated, but given its length and fast pace, it worked well within the context of this story.

~ANGST LEVEL – SEXUAL HISTORIES~
Low. I didn’t find this one particularly angsty for most of the book. The drama near the end was the angstiest part. This couple had the whole “hate turned to love” thing down pat. Most of the hate happened before this book begins, so this felt very “insta” and they are a pretty solid couple from the start. There was a TINY SMIDGE of OW drama. There was no OM drama. Neither were virgins.

~IN THE END~
LOVED IT! It was almost perfect. Fantastic writing. Great plot. Likable main characters. Intriguing secondary characters. I don’t have much else to say about it. I cannot wait to get my hands on the next book (Gabe’s). Therefore yours truly is going to give this one two solid thumbs up.

R. Scarlett lives in a small quaint town in Southern Ontario, Canada and has an unhealthy obsession with mythology and romance.

From studying English literature and minoring in History, she loves losing herself in a good book and snuggling up to her Brittany Spaniel.

When she’s not writing or plotting a delicious novel, she can be found hanging out with friends and family, going on long car rides, exploring small towns, or watching reruns of Sex and the City.

Book #2 in the Sweet Series. After facing a truth she never imagined, Beluah has to find a new path. Build a life without help and take care of her sister alone. Or does she… Abbi Glines is a #1 …READ MORE

Amazon   I dig. It’s what I do. I’ll literally use a shovel to answer a question. Some answers, though, have been buried too deep for too long. But I’ll find those, too. And I know where to dig—the Blackwood …READ MORE

Coming April 10th   “I bet I can untangle you.”At an airport baggage claim, Penny Darling looks up from her knotted mess of ear buds to find the sexiest hunk of man she’s ever seen. He’s got a military haircut, …READ MORE

New York Times Bestselling Author Sarah Castille is proud to present Naughty Shorts! These quick reads are full of all the feels as well as plenty of sexy times! Naughty Desires releases on April ...READ MORE