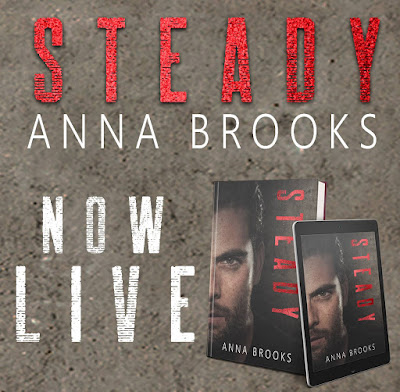 “STEADY was a well written story with an emotional impact that kept me reading. HIGHLY RECOMMEND!” ~Angela’s Opinion

“Anna Brooks has done it again. A fantastic read with the perfect mix of intrigue and heat.” ~Amazon Review

“STEADY is a PERFECT blend of SEXY and SWOONY, and is packed with ALL. THE. FEELS.!!!” ~Amazon Review

Erik Anderson is paying for his mistakes and enduring every bit of pain that comes his way. After all, if it weren’t for him, the girl who gave him more than he deserved would still be alive. Even if he were to be put out of his misery, he’d never see her again. Considering angels go to heaven and sinners go to hell, Erik’s going to burn.
Polly Madison has never had it easy. She wouldn’t even know what that looked like. Young and naive, she learned the hard way how vindictive some men can truly be. She’s fought her whole life for stability and control, both of which she refuses to give up ever again since she’s older and wiser now.
When Polly and Erik run into each other in the most clichéd way possible, it shouldn’t have meant anything.
In his arms, Polly felt safer than she ever has before.
Lost in her eyes, Erik sees a future he’d given up on.
They try to fight it. Try to deny something neither is prepared for. But when his own insecurities put her in harm’s way, Erik knows protecting Polly’s life is more important than continuing to wreck his.

GIVEAWAY!
Check out the Giveaway over on Anna’s Facebook Page
http://bit.ly/2uBpASx

I like this cover. I like the whole composition of it (the half cut off face). I like the way the title is placed. I like the color scheme used. It’s a simple cover but very effective.

I really enjoyed this one. This author’s writing style is very readable, and it was very well paced. The plot was interesting and well developed. This can be read as a standalone, but the heroine of this book and the heroine of book one do have some history that is alluded to. I haven’t read book one, so I found that aspect a little bit confusing, but it doesn’t take away from the story at all. This one was very insta-love, and there wasn’t any OW/OM drama. The hero does have a dead ex, but I never felt the heroine was second best. I would also say it was relatively low angst. There were some hot sex scenes and a lot of feels. All wrapped up in two bittersweet epilogues. I say bittersweet because I was hoping we would see something that I guess wasn’t in the cards for them, and that made me a tad sad.

There were some good secondary characters, and I can’t wait to read more about the guys working for Erik at THE FIRM. Both main characters were very likable. I enjoyed Erik as a hero for the most part. He was alpha and hot and all in with Polly. That said, I did find the whole self-hate/guilt thing he had going was a little too much at times. There is only so much self-deprecation I can take as a reader before I start rolling my eyes and thinking to myself; STOP THE F-ING WHINING already and get on with it. I also think his drinking problem was a bit brushed under the rug. As someone who has lived with alcoholics the chances of someone with a problem like his just stopping cold turkey without some sort of help are virtually slim to none. Polly had an equally bad history, but I found her to be the less damaged of the two. But like I said, even with this issues both main characters were very well developed, multilayered, and enjoyable.

On a side note, what was up with the guy at the bar near the end? It was a really odd scene with him asking questions about Polly, and I thought something was going to come of it, but we never hear anything about it again? It left me hanging…but whatevs. This one gets a huge two thumbs up from yours truly.

Pre-order yours today Coming October 9th  iBooks Nook Kobo Betray (verb): to deliver to an enemy by treacherySold to a sex trafficker by her drug-dealing boyfriend, Phebe Lawson possessed first-hand knowledge of the secrets of betrayal. She’d given up all …READ MORE

Forever by Monica Murphy Release Date: April 4th, 2017 Series: Friends Genre: Young Adult Forever, an all new Friends story from Monica Murphy, is now live!! SYNOPSIS She’s all I could ever want… I have a reputation around school. Cold. …READ MORE