It’s the start of nothing good.
I fired off a storm of raunchy text messages…to the wrong number.
And he replied.
Him: Show me a picture.
Him: Tell me your name.
Why does the lure of anonymity have me craving to indulge a stranger?

It’s the start of everything right.
I received a slew of text messages…when everything in my life was wrong.
And she made me laugh again.
Her: You’re probably a creeper.
Her: Possibly a stalker.
Why do I have the overwhelming need to find this stranger who saved me and make her mine?

Him: Take a chance with me.
Her: This is crazy.
Him: I need to see you.
Her: What are we doing?
Him: We’re about to find out.

J.D. Hollyfield is a creative designer and first-time author. When she’s not cooking, event planning, or playing around with her husband, son and three doxies, she’s relaxing with her nose in a book. With her love for romance, and her head full of book boyfriends, she was inspired to test her creative abilities and bring her own story to life. Life in a Rut, Love not Included is her first novel. Hollyfield lives in the Midwest, and is currently at work on her next book. 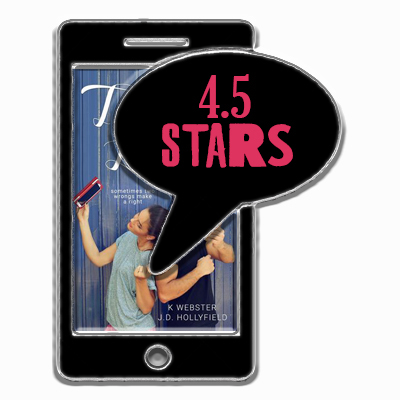 When drunken texting goes horribly wrong. Dani suddenly finds herself in a textlationship <– (that is actually a word) with a mystery guy named Ram. He is funny and sweet and makes her feel like no one else has.

Ram has just been going through the motions with life. Never really smiling or enjoying himself. That is until he gets a bunch of texts telling him off. Suddenly this mystery girl has him smiling and laughing.

When fate brings these two together it’s a new beginning for both. But lies have a way of coming out and when they do it could spell the end for our lovebirds.

I LOVED this book! It was cute. It was HILARIOUS. It was sweet. It was fun. It was well written. The sex scenes were hot. The pace moved along nicely. It had great secondary characters (for the most part…more about that later). Both Dani and Ram were likable main characters. It had feels. It had a little bit of angst. Honestly, it was an ALMOST perfect book.

So back to my aforementioned comment about secondary characters. By the end of this book, I was a bit over Dani’s BFF Andie. I get she was supposed to be all feisty and all that, but by the end, her back and forth antics with Roman (apart from the insult contests which was HILARIOUS) got on my last nerve. She just came across screechy, immature and really…a bit unhinged. What grown adult goes around hitting and kicking other people on a regular basis?

In any case since her and Roman’s book is next up I hope we get a more mature Andie because I LOVED Roman and want to see him get his HEA. Other than that this book ROCKED.

Are you looking for heart-pounding, edge-of -your-seat romantic suspense that is sure to leave you breathless? The you’re in luck! Entangled Publishing was two brand new, sexy titles to thrill you! ***   About VIABLE THREAT Special Forces soldier and …READ MORE

Devils With Halos By Natalie Bennett