Latest News
Check out this amazing teaser for BRYCE: A Sexton Brothers Novel by Jeannine Colette and Lauren Runow!
Add it to your TBR and PRE-ORDER today!

I don’t believe in Prince Charming, but when I met a handsome stranger on a rooftop his words intrigued me and his dares left nothing but temptation.

Then I learned the truth.

His name is Bryce Sexton. Media mogul, workaholic and a heart of stone. He’s broody AF and yet every woman in San Francisco wants him.

So why won’t he leave me alone?

Wherever I go, he’s there, trying to force his way into my world. What he doesn’t know is I already have a man in my life. A tiny redhead who loves Legos and Superheroes.

With every push, Bryce pulls me in further. Our pasts are laced with betrayal. Our futures are unpredictable. Our chemistry is explosive.

With each dare, I uncover a truth, but he’s exactly what I don’t need right now.

So why did I have to go and kiss him? 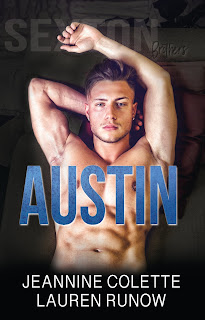 Austin Sexton is the man I’ve always tried to stay away from. He’s arrogant, entitled and a total ass. That’s why I didn’t bother giving him my name last night. We’ll never see each other again.

Or so I thought.

Imagine my surprise when I start my new job only to come face-to-face with the blue eyes I just declared all wrong for me. No, he’s not my boss, but being my boss’ brother seems almost worse.

No matter how hard I try to push him away, his secrets draw me in. When it comes to a Sexton that could be lethal…for my heart.

I have his secrets and I won’t tell a soul. Now I just have to not fall for him completely.

Lauren Runow is the author of multiple Adult Contemporary Romance novels, some dirtier than others. When Lauren isn’t writing, you’ll find her listening to music, at her local CrossFit, reading, or at the baseball field with her boys. Her only vice is coffee, and she swears it makes her a better mom!

Lauren is a graduate from the Academy of Art in San Francisco and is the founder and co-owner of the community magazine she and her husband publish. She lives in Northern California with her husband and two sons.

Jeannine Colette is the author of the Abandon Collection – a series of stand-alone novels featuring dynamic heroines who have to abandon their reality in order to discover themselves . . . and love along the way. Each book features a new couple, exciting new city and a rose of a different color.

A graduate of Wagner College and the New York Film Academy, Jeannine went on to become a Segment Producer for television shows on CBS and NBC. She left the television industry to focus on her children and pursue a full-time writing career. She lives in New York with her husband, the three tiny people she adores more than life itself, and a rescue pup named Wrigley.

Jeannine and her family are active supporters of The March of Dimes and Strivright The Auditory-Oral School of New York.

#DamnableGrace #HangmenHarem #HadesHangmen #DarkRomanceRevolution #AKAndPhebe #TillieColeBooks   Add to your Goodreads shelf now – http://bit.ly/2kHC2vB Eve1972Hi there! I’m a mom and wife by day (and night), aspiring writer (in my dreams), and an avid reader (every day of the week). …READ MORE

This top shelf cocktail is dark & dirty – can you handle a sip? Check out the cover of Villains & Vodka by Alta Hensley!     Release Date: December 5th ADD to your TBR → http://bit.ly/2i3pNGu   ~SYNOPSIS~ …READ MORE

Today we have the gorgeous cover reveal of Always You by Roxie Noir! Check it out and be sure to grab your copy September 13th! Title: ALWAYS YOU Author: Roxie Noir Genre: Contemporary Romance Release Date: Sept 13th   ~About …READ MORE

COVER REVEAL — He Lived Next Door By Portia Moore