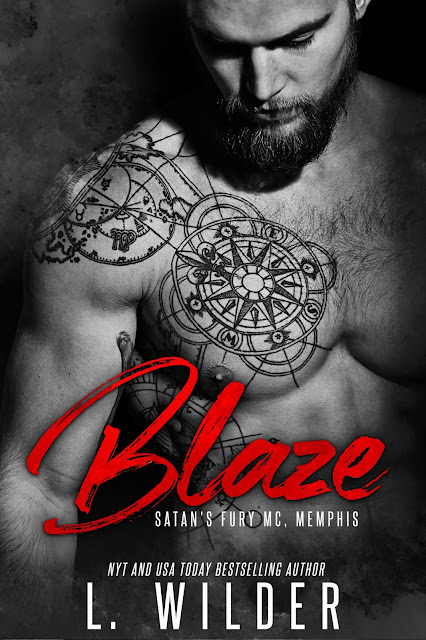 In Memphis, Tennessee, Satan’s Fury MC had become the most notorious MC in the city. That recognition hadn’t come easy. While people were visiting Graceland and walking down on Beale Street, my brothers and I were at war, fighting rival MCs and gangs who were trying to take control of our territory.

We had staked our claim, but when a new threat arrived, everything we had worked for would be put in jeopardy.

Kenadee Brooks was a nurse, trying to save lives and make a difference in the world. The moment I saw her, it wasn’t just her beauty that caught my eye. It was the light that burned deep inside of her that drew me in. I longed for it, and with each moment I spent with her, the more determined I became to make her mine.
But when she was pulled into my world, saw the life that I lived, would that light still burn bright or would it disappear forever?

Leslie Wilder grew up in a small town in West Tennessee. A country girl at heart, she’s always thought that life is too short, but she had no idea how short it really was until her brother passed away in 2014. She’s always been an avid reader, loving the escape only a great book can give, and wondered if she had what it took to write one of the wild romances she’d come to adore. With the support of her family and friends, she published Inferno: A Devil Chaser’s MC, one year after her brother’s death. With him in mind, she fulfilled her lifetime dream of writing. Since then, she’s completed the Devil Chaser’s Series and continued on with the Satan’s Fury MC Series. She has so many stories in her head, and can’t wait to share each and every one.

Leslie has been blown away by the support of her readers, appreciating every message, review, and encouraging word she’s received over the past year. She looks forward to continuing this journey with them for years to come.

Title: Heartthrob Author: Willow Winters Genre: Contemporary Romance Release Date: August 24, 2017   ~BLURB~ Nathan Hart is charismatic with a beautiful smile that makes women weak in the knees. A former bad boy with a mysterious past. He was …READ MORE

RELEASE BLITZ — At His Mercy By Shelly Bell

Amazon Nook Kobo iBooks   Angel in his arms . . . Devil at her heels One last, no-strings night of indulgence. That’s all Tristan wants before he begins a much-needed new chapter in his life. Instead he finds an …READ MORE

RELEASE TOUR — Within the Darkest Hollows by DA Roach

Title: Within the Darkest Hollows Series: Demon Hunters #2 Author: D.A. Roach Genre: YA Paranormal Release Date: December 13, 2016 Publisher: Limitless Publishing   Cassidy and her mystical ring are stuck in the middle of a battle between the …READ MORE

In the Land of Gods and Monsters By Carmen Jenner

COVER REVEAL — For the Love of Beard By Lani Lynn Vale