As the Hellfire Riders’ enforcer, Bull makes sure the club’s enemies get what’s coming to them. But this giant tattooed biker never saw what’s coming for him… Every morning for months now, I’ve been watching her. Sara Abu-Hamdi’s got a sweet smile and a curvy ass—and real soon, I’m going to make her mine. But I’ve got to move slowly, because there’s grown men who take off running when they see me coming, and the shadows in her dark eyes tell me she’s been running for a while. But when one of the Hellfire Riders’ deals suddenly goes sour, and Sara sees something she shouldn’t, my plan to go slow gets flipped upside down real fast. Because she’s ready to run again—but I’ll do whatever it takes to get her sexy little body under me until she craves my touch so hard, she’ll never leave.

Whatever it takes. Even if that means keeping her in lockdown and forcing her to share my bed…

Craving It All is a completely standalone romance within the Hellfire Riders series. You don’t need to have read the previous books in the series to enjoy Bull’s story. Craving It All is a double-length novella of 45,000 words and a HEA.

Every morning bright and early the enforcer for the Hellfire Riders MC can be found sitting at the counter of Richie’s watching Sara Abu-Hamdi. Her sweet smile and sexy curves entice him like no one ever has before. It’s the fearful look he sees in her eyes when anyone gets to close that has him biding his time. Have no doubt though…she will be his.

“There’s a reason I always sit at her counter so fucking quick. I don’t want to scare her with my cock trying to bust through my zipper like something out of Aliens.”

Sara is running from something and being careful has become second nature to her. Bull makes her feel safe though. He makes her laugh and he makes her tingle. When she takes the “BULL” by its horns and asks the sexy mountain of a man for a kiss and a favor the sparks fly.

When Sara gets caught in the crosshairs of Hellfire business it looks like the romance may be over before it even had a chance to start. Can Bull and Sara move past the fears and anger and find their way to a HEA? 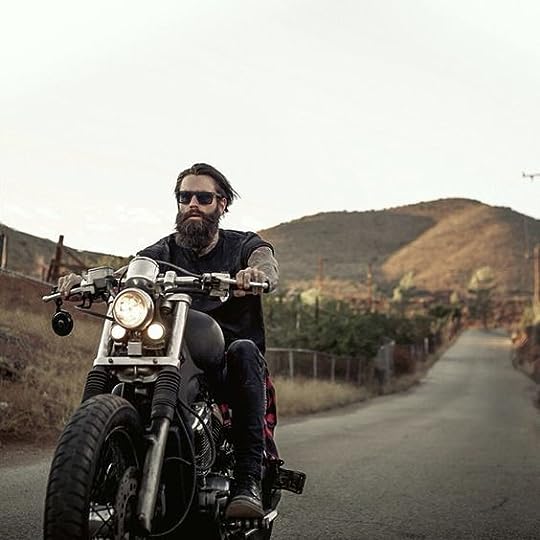 I REALLY enjoyed this one. It was well written and the plot flowed smoothly. I was never bored or had the urge to skim. Both characters were likable and real. Sara was a strong and sweet heroine. I’ve honestly never read a Muslim heroine before, so that was a nice difference for me. Bull was sexy and made my heart ache SO DAMN BAD at certain points of the story. You could just feel his pain over thinking he had lost Sara before he even had her. I loved that he wasn’t your typical six pack GQ model, but was hairy and thick (that sounds pervy doesn’t it?) The side characters were interesting. Though Pops is really the only one that gets a lot of book time. It even had a nice little epilogue that was two years in the future.

Overall a really enjoyable way to spend a few hours. Two thumbs up from yours truly…

Title: Daydream An Oath Keepers MC Standalone Author: Sapphire Knight Genre: Romantic Suspense Release Date: August 1, 2017   Blurb Daydream, or was it more like a Nightmare?   He was a biker, a Nomad at that. They’re the worst …READ MORE

Title: Damaged Author: Willow Winters Genre: Romantic Suspense Release Date: November 14, 2017   ~SYNOPSIS~ I married the bad boy from Brooklyn. The one with the tattoos and the look in his eyes that told me he was bad news. …READ MORE

RELEASE BLITZ — Face-Off At The Altar By Toni Aleo

✰✰RELEASE BLITZ✰✰ Credo (Scars of the Wraiths, #3) By Nashoda Rose

Ruined by A.K. MacBride is coming August 28th and we have the gorgeous cover to share with you today!     ~SYNOPSIS~ Love? I have no space or need for it. I’m perfectly happy ...READ MORE