Do you like over-the-top possessive dirty-talking SEXY alpha book boyfriends? What about ones who ride motorcycles and live life according to their own rules?

He’s 28, tall, dark, gorgeous, and 100% alpha male. In the relationship department, things either go one way or the other. He either shows them a good time and moves on, never going back for seconds, or he stakes a claim and things get serious REAL fast. It’s been a long while since he’s been motivated to claim anyone. Deacon has what some might classify a problem with possessiveness and jealousy. When he stakes his claim, he means it. And he allows no one to mess with that.

Meet Ella.
Ella, 23, is like the Marilyn Munster of her eclectic household. Despite her crazy hippie parents and rambunctious little brother, her life is boring and humdrum. And her love life is so far off the mark that she considers herself in a serious relationship with her battery-operated boyfriend. She’s having trouble shaking off an ex that won’t go away and fending off her partying friends who continually hassle her to either party with them or be their designated driver.

But things are about to get real for Ella. Real fast.

Very soon after she notices the new Beautiful Biker in town she finds herself in a real pickle. In fact, Ella keeps finding herself in trouble. And Deacon, whose MC has just opened a chapter, biker bar, and garage in Ella’s town, (much to the chagrin of an existing rival MC), notices Ella, too. Deacon keeps swooping in to save Ella’s bacon from a variety of tight spots.

And because of that, it draws even further attention to her. Someone or several someones want revenge against Deacon and his MC and don’t mind using Ella to make a point.
Ella has been warned away from Deacon. And she worries that her heart will go SPLAT if she lets the beautiful biker get too close.
But it’s too late. Ella has no choice because Deacon is determined to get right in her space.

Deacon. He’s 28 and tall, dark, gorgeous, with tattoos, rings, and a manbun (yowza) He is also 100% alpha male. Third in command to the Dominion Brotherhood he sets his eyes on one delightful little package and will stop at nothing to make her his.

With outside forces spreading rumors about Deacon and a rival MC seeking revenge, can these two find their HEA in the chaos or will they be ripped apart before they even really have begun??

“No, baby. Don’t be sorry about that. It was beautiful. And that was just the beginning,” he told me, “I’ve got a feeling we’re gonna make a lot of beauty together.”

What a delightful little gem of a story this was. I went into it TOTALLY blind. I just read the blurb, and no reviews. It’s been ages since I just took a leap of faith on a book…

This reminded me A LOT of Motorcycle Man by KA only grittier. It is certainly KA length, and would have been a 5 star read had it been tightened up a bit. We get a lot of unnecessary details (IMO) especially in the beginning. That said, It kept me interested and I didn’t feel the need to skim.

I enjoyed both the hero and heroine. Deacon was smokin (I mean tats, manbun, rings…YUMMY) He was also alpha, but had a lot of sweetness to him so he didn’t come across like a total caveman. Ella was sweet, but also sassy and really FUNNY (drunk Ella was priceless) with a big heart. 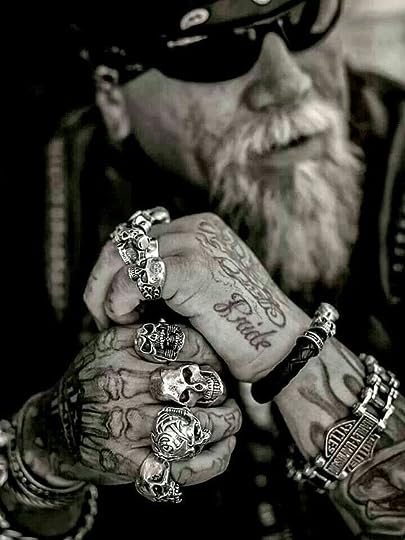 This also had a PLETHORA of interesting side characters. From Ella’s mom and dad and best friends, to Deacon’s brothers and father. And of course a ton of MC brothers who could be getting books of their own. The MC storyline with the rival club was pretty gritty IMO. There were a few things that made me cringe a little, but I have read worse and that storyline wrapped up with good closure. This even had a “8 year in the future” epilogue (I’d skip this though if you want to avoid knowing what couples end up together in later books)

Overall a really enjoyable way to spend a few hours and I will for sure be keeping my eyes out for more books by this author.

BLURB For the first time since we launched Bitten by Kelley Armstrong, Random House Canada is thrilled to announce the debut of a new urban fantasy series. Kristi Charish’s The Voodoo Killings introduces Kincaid Strange, not your average voodoo practitioner… …READ MORE

♥♥♥ Rule No. 1: Do not enter the game unless you intend to finish. Once accepted, there is no escape. This is a love story, one that comes with rules, expectations, and dark shadows. One ...READ MORE

Through the Mist By Cece Ferrell