~SYNOPSIS~
You never get over your first love. It’s something I’ve heard countless times. Like someone has to point out that your pain will never go away. That your shattered heart will never mend.
Because that’s exactly what my heart did the day I watched Asher Evans board that train- it shattered, splintering into a million tiny fragments that I didn’t think I’d ever be able to piece back together. He was the boy I had loved since I understood what loving someone meant. The one who knew me inside and out. The one who swore he’d never let me go. It’s been six years since that day and even now the memory haunts me like it was yesterday.
I’ve done my best to move on, to rebuild, and for the most part I’ve done pretty well. But all of that comes crashing down when Asher strolls back into town like he never left.
I don’t want to want him. I certainly don’t want to need him. But that doesn’t stop me from doing it anyway. Only things are different now. I’m different. I’m not the girl he left behind all those years ago. I may have been foolish enough to give him my heart once but I won’t make that mistake a second time. Or at least that’s what I tell myself until I’m standing face to face with the one man who has the power to break me all over again.
Love Me Like You Won’t Let Go is a STANDALONE second chance romance. 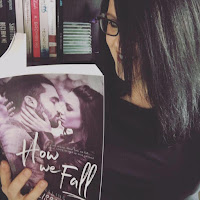 Melissa Toppen is a Reader’s Choice Award Winning and Bestselling Author of New Adult and Contemporary Romance. She is a lover of books and enjoys nothing more than losing herself in a good novel. She has a soft spot for Romance and focuses her writing in that direction; writing what she loves to read.
Melissa resides in Cincinnati Ohio with her husband and two children, where she writes full time.

Second chance romances used to be my favorite trope until they all started to follow the same sad outline. Hero moves on to screw 5000 other women and has a decent life, while the poor left behind heroine stays broken and pining. Now this book has some of that (broken & pining), but I appreciated the fact that the author had the heroine move on with another man (Tyler), and she seemed genuinely happy. As for the hero, I have NO clue what he was up to since there is never a single mention of him being with OW while traveling the world for six years. I don’t know if he slept with OW (I imagine he must have), but we the reader are never given that info. So in that regard, I was quite pleased with this book.

I also thought the writing was excellent. It was well paced. I found the plot to be enjoyable. There wasn’t any OW drama. Obviously, there was OM drama. There wasn’t any sex until very late, and it was super mild. There was a great cast of interesting secondary characters. There was (HIGHLIGHT TEXT FOR SPOILER) cheating. Unfortunately, I didn’t like either of the two main characters. They were two of the most selfish human beings I have ever had the displeasure to read about. (lol) But, I’ll get into that more in a bit. Last, it was all wrapped up in an ending that I guess I was supposed to be happy about? However, all I felt was the happy ever after of these two characters came at the expense of a decent guy who was left heartbroken and humiliated. And honestly, that left me sad…

So onto the HUGE issue I had with this one. I loved Tyler. Genuinely adored him. He was a nice guy. A fantastic human being, that loved the heroine completely. I liked him way more than the hero who quite frankly was a selfish prick. Both when he left the heroine who he claimed to love SO much, yet he couldn’t be bothered even to send her a single message to let her know he was alive for six years. And he was still a selfish prick when he came back expecting her to fall right back into his arms. He completely ignores the fact she had moved on with Tyler. He didn’t seem to feel any remorse at all for pursuing her even though he knew she was getting married in six short weeks. I mean the mind boggled… Poor Tyler deserved a way better woman than a fiancee that ran around behind his back to spend time with her first love. Maybe I should be happy he escaped being stuck with a wife who never got over her teenage love. (lol)

So yea, even though overall I enjoyed this book. I think the Tyler issue was handled poorly. Perhaps if he had been dealt with much earlier in the book and not dragged out until the bitter end. And by that I mean her f-cking (HIGHLIGHT TEXT FOR SPOILER) WEDDING DAY as she is about to walk down the aisle, I would have given this one a higher rating. The author made Tyler too likable. (lol) As it stands, I just can’t go with anything higher than 3-Stars. C’est la vie.

COVER REVEAL — The Fall of The King By Stacey Marie Brown

Crescendo By Lana Sky (Beautiful Monsters, #1) Publication date: May 13th 2017 Genres: New Adult, Romance, Suspense   SYNOPSIS You don’t become the fiancé of one of the most powerful crime lords in the city without understanding exactly how gritty …READ MORE

NEW YORK TIMES bestselling author Lori Foster returns with the second installment in her explosive new series featuring sexy bodyguards who’ll do anything to protect the ones they love. Grab your copy of HARD JUSTICE here! Amazon* Kindle * …READ MORE