Never Ever… Go Backwards. It was just supposed to be one night. One party to remind her of the good ole days, to remember what it had been like to have a family. It was not supposed to turn into a one night stand, and it was definitely not supposed to involve the guy every woman within a hundred miles had taken a ride on, or turn into more than just a good time. But his eyes… His dirty mouth… One night couldn’t hurt, right? Never Ever…

Get involved. Never ever, commit. The only thing he was involved in, was the club. The only people he was committed to, were his brothers. He had a roof over his head, a job he liked, brothers to share the good times with. Plenty of women who came through the club if he needed to get off, women with no strings and no expectations. What else did he need?

But her ass…
The way she shot him down…
That sass!
That mouth…God, that mouth…

Everly is an MC woman born and breed. When the unspeakable happens on her wedding day, she runs leaving all those good memories behind. That’s until her friend Susan talks her into going to a club party at the Perdition MCcompound. There she finds herself eye f@cking the enforcer for the club. A sexy-as-sin wild beast of a manwhore. Before the night is over she’ll find herself in his bed. Come morning reality rears it’s ugly head and she is left with more than just memories…

Lucas Morningstar (ROAR) isn’t looking for love. He doesn’t do commitment, and he doesn’t ever want to settle down. After a night of blistering hot sex, he sends the fiery ginger on her way. He’s sure she’ll be like all the rest and come looking for more. After four months of nothing, fate throws these two together once again. Roar is in for the shock of his life, and maybe commitment and family isn’t such a bad idea after all…

“She was something else, looking out her back window at the land she’d bought and made a business out of. Flowers and fairies and fantasy. Something soft and gentle, his little earth mama, makin him a baby in her beautiful body.”

What a surprising little gem of a book this was. It’s got a very “KA” feel to it, which I loved. I mean who doesn’t love an OTT alpha male. The plot was interesting and kept me turning the pages. The side characters were enjoyable and I look forward to reading more about them. I REALLY hope TOP gets his own book and TARA also. I do wish there would have been a better epilogue. I seem to be saying that a lot in my reviews lately, but it really is like the icing on a cupcake for me. At least in this one we get a little bit into the future look, so it wasn’t a total disappointment. 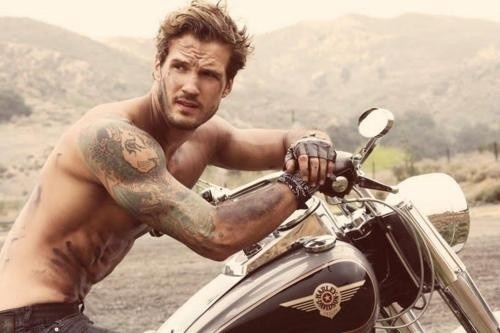 I loved both the hero and the heroine. Everly was really a feisty heroine without being over the top bitchy. She stood her ground, but was also sweet and vulnerable at times. Roar was awesome. He was SUCH an egotistical dick at the beginning, but he quickly grew on me. Dirty talking and smokin hot. He was so devoted to the heroine. The only problem I had was both the hero and heroine sounded EXACTLY the same. They both spoke in those incomplete sentences, that are so popular with alpha heroes. I like that in my heroes, but it’s a little weird for a heroine to speak like that. Just a small nuisance though.

Also, and this is just me being nitpicky. The author really should look into a better cover designer. The cover on this one and the next are really doing her no favors. Had a few of my friends not read this and gave it rave reviews, I wouldn’t have gave it a second look. Covers really need to catch my attention before I’ll give a book a chance. Anyways, just my 2 cents..

Overall I was really impressed with this and I am looking forward to reading the next up in this series.

WE HAVE AMAZING NEWS! New York Times Best Selling author, Sawyer Bennett brings you an alter ego who is both sweet and swoony. We are excited to introduce Juliette Poe! Her first release AIN’T HE PRECIOUS releases on April 11th! …READ MORE

PROLOGUE PRESENT PREPPY Tiny flashes of dim light spark in the darkened corners of my mind. Slowly, it turns from dusk to dawn, awakening my thoughts as the inner light grows brighter and brighter. I hear a sound, a faucet …READ MORE

Title: Chasing The Dark Author: Kassidy Carter Genre: Romantic Suspense Release Date: TBA SYNOPSIS When all you have is darkness the only thing left to do is chase it. My life is a lie. People ...READ MORE