Trying to carve out my own way in life, I joined the Air Force, only to have my dad pull strings to place me in Special Ops. Turns out, my entire life had been decided for me; I was to follow in my father’s footsteps.

Once discharged, I had my goals within reach and defying dad was at the top of my list, until Jesse walked in, stealing everything I wanted. I should’ve hated her for taking away my choice, but I couldn’t; one smile was all it took to brand herself on my soul. I swore I’d bide my time and eventually have my dream job and her!

Who knew the position my father forced me to take for Titan Security would lead me to everything I desired? I’d have to act fast, as time was working against me, with a potential killer on the loose, money missing from the company, and someone stalking her…

Jesse Bradford:
On the verge of making manager, I was consumed with work, before Derrick stepped in and snatched my promotion out from under me. He’s familiar, but how? And why did he take my breath away every time we touched? I wanted to make his job a living hell – until someone tried to kill me.

Now my life was in his hands, the ones I imagined bending me to his will. Why am I even thinking this way? He has me confused, forcing me to rethink who I am, submitting to my desires, and helping him track down a killer(s) before they strike again. Can I trust him? I don’t know that I have a choice.

— PURCHASE—
.99CENTS FOR A LIMITED TIME!

“Our first encounter was meant as an attempt to scare you off. You now understand why it was dangerous coming there: you were related to the owner. But, I convinced your uncle to allow your membership. At least that way, you wouldn’t seek guidance elsewhere, and I could keep watch over you and protect you.” His voice lowered and the pupils of his eyes widened as he took in my appearance. He was turned on, and I couldn’t blame him; the pull between us, which existed both in the club and at work, was stronger than ever—a hum of electricity just waiting to be released. “The moment I saw you, I wanted you for my own. I used the threat of a killer to keep you close, but truthfully, I wanted to explore the feelings you stirred inside me—something I’ve never felt with anyone before. When I gave you that collar, I made sure it had my initials as Master Derrick, not just the Master of your Dreams.”
He looked out into the room, staring at what, I don’t know. “I love dominating you in the bedroom and behind closed doors. I want to push you to your limits, but I want you to challenge me in life. I’ve never met someone who could go toe-to-toe with me on anything.”
He swallowed hard, before turning his face back to me. “You are the only person with the power to destroy me. I don’t know when it happened or why, but I’ve fallen for you. Seeing you almost killed made me realize just how deep my feelings run. I thought they were related just to the sexual chemistry between us, but the pull was there at the gym, at the pool, and in the office when I was just Derrick. Why do you think I worked so hard to keep my distance from you? I tried to force myself not to get emotionally attached, but here I am. As I said before, little one, you have all the power.”
I reached up, grabbing the back of his head and bringing his lips down to hover close to mine, as I whispered, “I forgive you. I think I’ve fallen for you, too.”
His mouth possessed mine completely, as his tongue pushed through to devour every inch of me. I matched his kisses fervently, needing reassurance that I was truly alive. 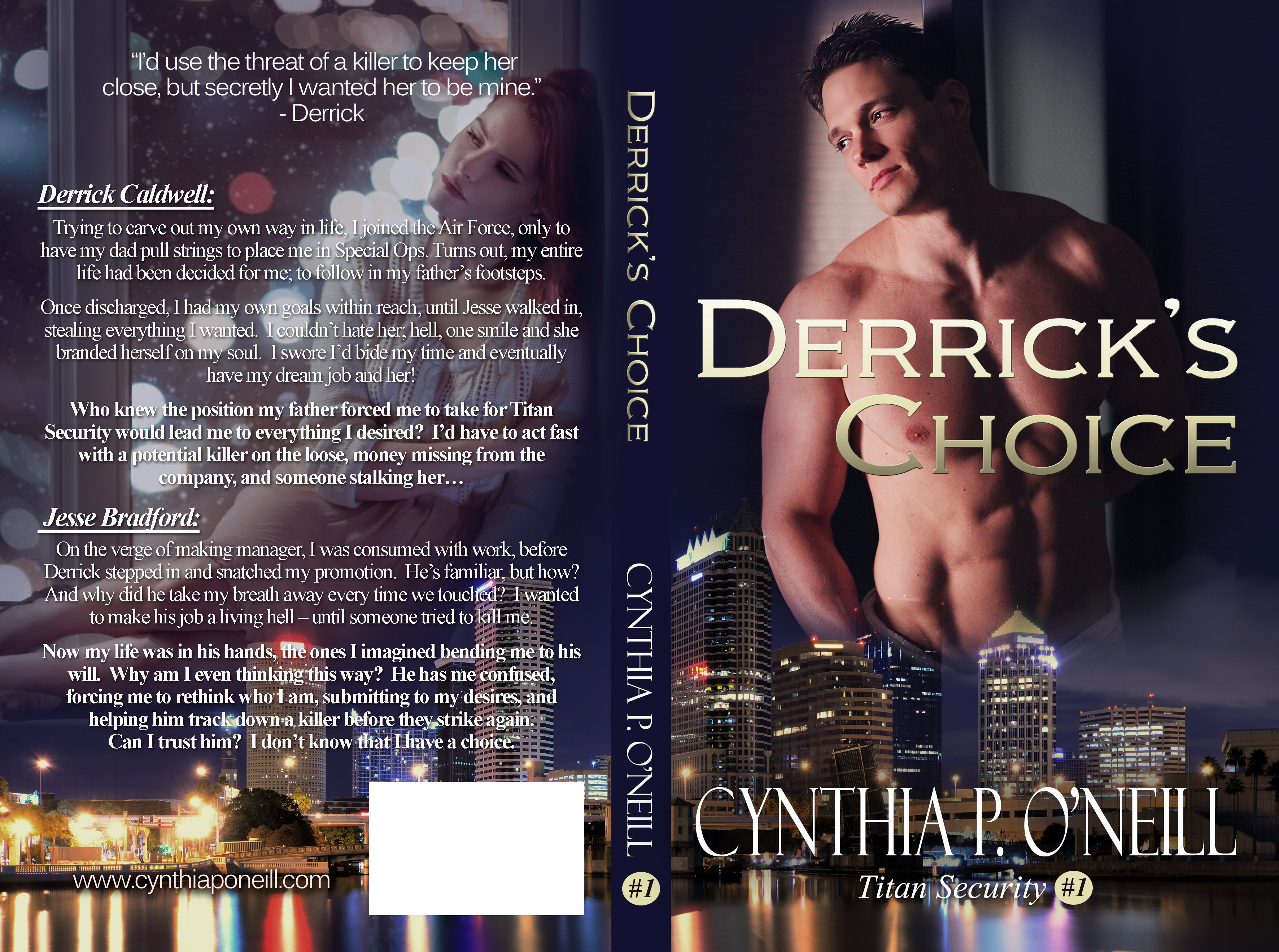 Cynthia P. O’Neill grew up in a small town in South Florida and moved to Central Florida to attend college. There, she married her friend, love, and soul mate, and still resides with their amazing son, and a feisty, four-legged little boy.
In her books, Cynthia draws on her background in healthcare and business, along with her husband’s engineering knowledge.
She currently writes on all levels of Romance. The Remembrance Series encompasses New Adult with a touch of Paranormal activity and a hint of Historical romance. A Learning Series is for those who like a little more steam with their books, falling into the categories of Contemporary – Erotica, with a hint of suspense.
Her latest series, Need, will have several books, each focusing on one couple per book. The main couple will then become supporting characters, while some of the background characters step forward to find their own happily ever after. It will be will be a Contemporary – Erotic romance with a high level of suspense added.
She tries to make her writing very personal and close to her heart. Regular life is the inspiration for her books, but her imagination takes them to new heights, opening up possibilities that would not normally exist.
To learn more about the author, please visit Cynthia’s website at: www.cynthiaponeill.com Facebook | Twitter

— GIVEAWAY —
Up for grabs — $25 Amazon Gift Card!
a Rafflecopter giveaway

Today we are celebrating the teaser and excerpt reveal of DIRTY SECRET by Chelle Bliss & Brenda Rothert. This book is a contemporary romance, standalone, title that you won’t want to miss! Check the links below to pre-order it, or …READ MORE

Until We are Gone By Gia Riley

Until We Are Gone, an all-new Standalone Emotional Romance by Gia Riley is NOW LIVE!!     ~SYNOPSIS~ I wanted a family with Cash.We had dreams –building a house, kids, a dog, and, yes, even the white picket fence.Or …READ MORE

In the Tudor age the murder rate was five times higher than it is today. Now, in this unique true crime guide, the Tudor Murder Files reveals just how bloody and brutal this fascinating era really was. From the dark …READ MORE

She calls me a madman…I call her mine. Madman’s Method by V.F. Mason is dark, twisted and addicting! Release date: September 5th. ADD TO YOUR TBR — http://bit.ly/2XW0XeU SIGN UP for the live release ...READ MORE