Title: A Covert Affair
Author: Kennedy L. Mitchell
Genre: Romantic Suspense
Release Date: March 29, 2018
~SYNOPSIS~
Agent Lucia Rizzo
A mole within the SEALs and I’m the one to find him.
Simple for someone with my type of ability to read through lies.
Everything was laid out, we had a plan. A good plan.
Go in undercover as a reporter, gather intel, identify the mole and come home.
But it didn’t turn out that way. Not even close. Of course, the Sr. Officer over the platoon in question is a former one night stand who became way too clingy. And to top it off his best friend, and my escort around base is someone whom I desperately want clinging, without clothes would be preferred. The number of obstacles in this operation are too many to count but I have to find the mole, no matter what, my reputation within the CIA depends on it.

Sr. Officer Gabe Wilcox
Who would have thought a quick-witted, hotshot CIA agent would be my kryptonite. But is she ever. From the moment, she walked into CO’s office I was hooked. She a drug and I’m the willing addict doing anything and everything just to get one more hit of her. She says we are a bad idea, that it would complicate things, what does she know. We could be great together. We will be great together. All I have to do is convince her we can play and get the job done too. I want the mole caught but I might want her just as bad.

A Covert Affair is a contemporary romantic suspense, standalone novel.
ADD TO GOODREADS

~AUTHOR BIO~
I live in Dallas but I am not a Texan by birth, I am a transplant from Tennessee and married a true Texan so I had to stay. We live in an older home in Dallas proper with our son and goldendoodle (who is roughly the size of a pony).
Writing isn’t my day job, however it is my joy and favorite hobby. I enjoy sending my friends new chapters nightly and hearing their reactions the next day. That is why I write, being published is just a bonus really. My real job is the same every day, but at night I get to be someone else and write about all these fun adventures and sexcapades:) When I’m writing you can find me on the couch, earbuds in and a full glass of wine beside me. Music inspires my stores, at the end of each book I list the playlist that helped me through writing the novel.
When I am not working or writing, I am reading. I go through about 3 books a week and I am 100% sure that I’m that annoying person at book-club that gets on to people when they are not keeping up with the monthly readings or suggest the movie is as good as a book (Sometimes I wish I could vote those people out of book-club like they do on Survivor. “The tribe has spoken”).
My favorite authors that inspire my writing are Colleen Hoover, Sarah J. Maas, Sandra Brown, and Rainbow Rowell.
~AUTHOR LINKS~
FACEBOOK
WEBSITE
TWITTER
INSTAGRAM
NEWSLETTER 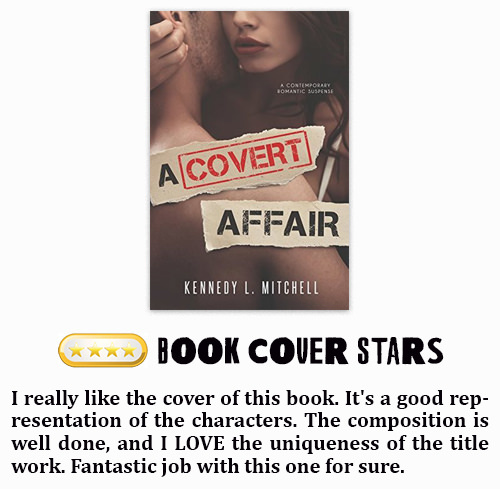 ~WRITING – PLOT – PACE~
So color me impressed because this book was all kinds of fantastic. It probably would have been a 5-Star book if it hadn’t been SO long. My interest started to wane at about 60% in. That said, I kept plugging on and it started to pick up again around 80%. The writing was fantastic though. The pace was a bit up and down. I am chalking that up to it being a bit too long. I think the author could have tightened up the story a bit. The plot was super engaging and probably one of the best examples of romantic suspense done right. The story is told from both Lucia’s and Gabe’s POV (my preference always). Last, it was all wrapped up in a very satisfactory ending.
~HERO~
GABE…What can I say about Gabe? I ADORED him. He was pretty much a perfect book boyfriend. A smokin’ hot Navy Seal. A player (but it’s not thrown in your face). He was alpha. He was sweet. He was funny. He was a great friend. He was an excellent leader. He was all about Lucia from the moment he meets her. I have nothing bad to say about his character.
~HEROINE~
LUCIA…I’ll be honest, I usually struggle with heroines like Lucia. She attended West Point. She was in the army. She is now a CIA agent. She was tough. She was strong. She was feisty. She was bada$$. But somehow this author managed to also make her very likable. Very relatable. Even vulnerable. I simply adored her character as well. 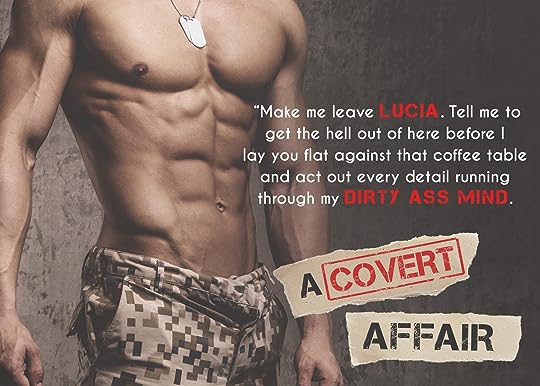 ~SECONDARY CHARACTERS~
This book had some great secondary characters in it. My favorite by FAR was Tony (Flakes). He was such a douche especially in the beginning, but man the banter between him and Lucia and him and Gabe made me laugh my a$$ off at times. I wasn’t sure I wanted to read a book featuring him (he pretty much cheats on his wife all the time) but the author redeemed him by the end and now I am looking forward to seeing him fall in love (hopefully he is getting a book). I also really liked Luce’s friend Brook and there were a few of the guys on the Seal team I wouldn’t mind reading more about.

~ANGST LEVEL~
Highish… I found this angsty mainly because Lucia is keeping a secret from Gabe and I spent the entire book waiting for the truth to come out and the other shoe to drop. When it did finally drop I was impressed by how the author handled the situation. I was expecting the usual cliché reaction by the hero and that isn’t what we get. There is a smidge of OW drama. Toni tries to cause issues between Gabe and Luce and invites some women to join them at a bar. One of them hangs off Gabe all night. He isn’t really interested but stays and ends up dropping the two women and Toni off later in the night (the three being drunk). The heroine sees this because Toni sets it up. She isn’t overly bothered by it and it happens before they officially begin a relationship. I wasn’t bothered by it in the least because we get Gabe’s thoughts. There is also a bit of OM drama in the form of Tony. Lucia and he slept together once ten years prior, and she ghosted him. He is a bit bitter about this for a while.

~IN THE END~
I pretty much LOVED this book. Like I mentioned had it been a little shorter I would have given it 5-Stars. That said, the writing was fantastic. The plot was well developed. The characters were intriguing and very likable. There were twist and turns that kept me guessing right up until the end, and I appreciated the author didn’t go down the usual overdone route with the secret revelation. Therefore yours truly is going to give this one two HUGE thumbs up and I will undoubtedly be keeping my eyes peeled for the next book in the series.

The name on the screen was “Absinthe.”I knew her as the sultry voice blowing up my phone for late night chats about Proust and Hemingway interspersed between the best phone sex I never knew I could have. We’d never met. …READ MORE

Addicted By Krys Fenner (Dark Road Series, #1) Publication date: September 29th, 2017 Genres: Contemporary, Young Adult     ~SYNOPSIS~ Sixteen-year-old Bella Kynaston has been the victim of a brutal rape, by someone she can only ...READ MORE

Heartbreaker, an all new Alpha Male, Standalone Romance by Anna Brooks is coming February 23, 2018!     ~SYNOPSIS~ I wasn’t supposed to be in town for long. Get in, get the job done, ...READ MORE