Nine years after a tragic accident, Hannah “Brennley” Evans has returned home to the snowy mountains of Whistler, Canada. This is the very place that destroyed her, where her whole world ended, and the reason she now goes by Hannah Jennings.
Struggling with his own tragic past, Rhys Axton, an infamous sexy snowboarding champion, wants nothing more than to be the next Olympic hopeful. Sex, snowboarding, and working out are all he cares about, which helps shut off the demons that haunt him and the family who rejected him.
The moment Hannah walks into his room, he knows something is different about her. Drawn to her, he can’t seem to stay away from the mysterious, guarded girl. They are two heartbroken souls who both understand the darkness.
Little does he know she lives in lies and carries secrets that will bring his universe to its knees and secrets that will bury them both alive.

Stacey Marie Brown is a lover of hot fictional bad boys and sarcastic heroines who kick butt. She also enjoys books, travel, TV shows, hiking, writing, design, and archery. Stacey swears she is part gypsy, being lucky enough to live and travel all over the world.
She grew up in Northern California, where she ran around on her family’s farm, raising animals, riding horses, playing flashlight tag, and turning hay bales into cool forts. She volunteers helping animals and is Eco-friendly. She feels all animals, people, and environment should be treated kindly. 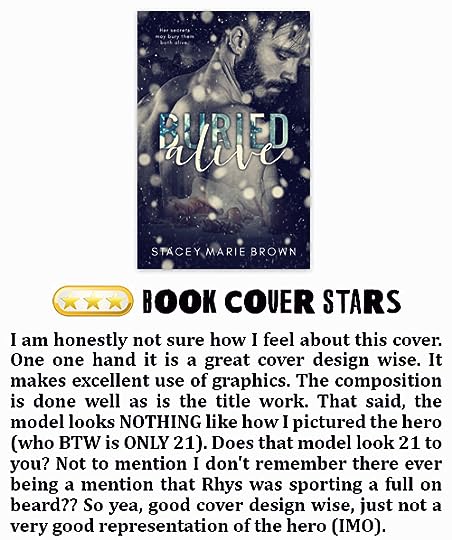 NOTE: This coming year I have set a challenge for myself of reading one book a week that takes me out of my comfort zone. A book that may include one (or more) tropes (scenarios) that I avoid like the plague. Cheating. Older women/younger man. OW drama. Just to name a few. Nothing is off limits. I am taking a HUGE step out of the box I live in and charting a course into the unknown (HaHa). My reviews for these books will differ from my usual as I will focus more on whether the author wowed me despite it having content I avoid. That said, I will go into each book with an open mind and an open heart and who knows, maybe I will discover a new favorite author on the way

~THIS BOOK INCLUDED THE FOLLOWING TROPES (SCENARIOS) I USUALLY AVOID~ (don’t click if you don’t want the book spoiled!!)
(HIGHLIGHT TEXT FOR SPOILER) –> — Older Woman/Younger Man
— Sibling sharing
— OW drama
— Extreme manwhore hero
— Hero is with OW after meeting and having feelings for the heroine

~WRITING – PLOT – PACE~
I found this one to be very well written. The pace was great. The plot was engaging and even though it had pretty much EVERY trope and scenario I hate in my romance books it still kept me turning the pages. I loved that it was set in Canada my home country. I figured out what the twist was very early on and It almost had me throwing in the towel. Alas, I kept going to see if I was right and I was. There was also another twist at the end I did NOT see coming and it left me a bit stunned.

~HERO~
Rhys, I didn’t love him. I didn’t hate him. He was your typical cliché over the top arrogant manwhore and I am exhausted with cliché manwhores. Not to mention he was only 21 but had the sexual past of a forty-year-old…sigh. Honestly, his character didn’t have much depth apart from being an arrogant douchewhore.

~HEROINE~
Hannah was a decent heroine. She was older than Rhys and we all know how much I dislike the older woman/younger man thing. That said, she was barely four years older, so it didn’t bother me overly much. I don’t have much else to say about her. I liked her. I didn’t understand why in the world she would want ANYTHING to do with the walking STD Rhys, but crazy makes the world go around so c’est la vie.

~SIDE CHARACTERS~
There was a good cast of secondary characters in this one. I loved Siena. She was a female version of your typical manwhore character. I also liked Shaun and would love to see a little novella with him.

~HEAT LEVEL~
This was light on the spice. For a book that constantly harped on what a whore the hero was, it was tame in the sex department. The first sex scene doesn’t even take place until 65%. That said, the ones we get were suitably hot.

~ANGST LEVEL~
Highish. I didn’t find it particularly angsty per se. There was just a lot of things I don’t particularly like in my romances that made it more on the angsty side for me. There is a TON of OW drama in this one. Tons of mentions about the hero’s manwhoring ways. OW popping up throughout the book. The hero is with OW after the author has built up the attraction between the main characters. There wasn’t an OM drama. I wish there had been so it would have offset the nastiness of the hero’s whoring ways. *lol* There was also a lot of push/pull on the part of the heroine.

~IN THE END~
To be honest, this book was doomed from the start. As soon as I figured out it had (HIGHLIGHT FOR SPOILER) –> sibling sharing along with an older woman/younger man, I knew I would not love it. There were several times I debated with myself about throwing in the towel. But the entire point of this challenge is to step out of my box and despite the plot having things that turned me off I still found myself thinking; just a few more pages and then I’ll call it a day. A few more pages turned into a few more chapters and that turned into me finishing the book. I didn’t hate it. I didn’t love it. It was a middle of the road read that was very well written and had an interesting plot. Unfortunately, sometimes even those things can’t get you past personal hangups and had it just been one or two things I might have gotten over them, but NO, this one had just about EVERY SINGLE THING I hate in romance books and that is what ultimately brought this one down FOR ME. So be sure to keep in mind when you are deciding on whether or not to give this one a chance that this review is solely based on MY feelings and you may well not be bothered by or have the same hangups as I do.

Coming September 12th   I don’t like to be touched. I’m the hacker-geek-goddess of the FBI. When I’m hiding behind my screen, I’m a safe distance from everyone; isolated, powerful. No man has ever touched me, but when I’m captured …READ MORE

Title: Assassin’s Prey Series: Assassins #3 Author: Ella Sheridan Genre: Romantic Suspense Release Date: July 22, 2019   ~SYNOPSIS~ I killed my first man at the age of twelve. I’ve been killing ever since. I thought it was all …READ MORE

Title: Belong Author: NB Baker Genre: Contemporary Romance Release Date: June 26, 2017 Cover Designer: Robin Harper @ Wicked by Designs SYNOPSIS  When everything is stacked against you, sometimes surviving only happens when you find that one person in the world and the one …READ MORE

Title: Royal Atlas Author: HJ Bellus Genre: Contemporary Romance Release Date: December 12   Love struck me at the early age of five. The boy turned into a man, and I fell even deeper. Guy Webb had no idea ...READ MORE

American Queen by Sierra Simone Release Date: October 25th, 2016 Genre: Contemporary Romance Cover Design: Hang Le  Synopsis It starts with a stolen kiss under an English sky, and it ends with a walk down ...READ MORE