Title: Captive Beauty
Author: Natasha Knight
Genre: Dark Romance
Release Date: January 24, 2018
~SYNOPSIS~
Cilla
The Beast had Belle.
Killian Black has me.How I got here doesn’t matter, even though he says it does. Says it was my choice. He doesn’t get it, though. It wasn’t ever a choice for me.

And now, he’s changing the rules.

The agreement was one month. For thirty days, I’d be his. He’s no longer satisfied with my body alone, though. He wants my soul, too. Wants every part of me. And even though I can pretend I’m safe when I lie beneath him, this man does something to me. Something wicked.

A thing that will break me.

Killian
Cilla made the choice. She offered the deal. I just took her up on it. So what if I changed the rules half-way in? I’m not apologizing for it.

See, Cilla and me, we’re the same. She’s dark. As dark as me. Something happened to her. Something bad. It damaged her.

But it’s not a hero she seeks. It’s an avenging angel. A dark knight. That, I can do. I’ll slay her dragons, but it’ll cost her, because in return, I want everything. And I’ll take it.

Author’s note: Captive Beauty is a standalone romance. Think Beauty and the Beast, but twisted and dark in the best, dirtiest ways.

~EXCERPT~
Prologue 1
Cilla
He’s watching me. I know he is. He has cameras everywhere. Why wouldn’t he have one here? In this, the “special” room? He told me he likes to keep an eye on his things. And that’s what I am. A thing. A possession.
His.
Fucking his.
And today I fucked up.
Today he’ll take it out of my skin.
I shudder with the thought. With the knowledge of what I know is coming.
I’ll fight him. I wonder if he expects me to. Wants me to, even. All I know is I can’t submit to him. I can’t let him break me.
But I am breaking. Little by little.
I wonder if that’s why he took me.
This is a game to him. My life is a game.
I hug my knees to myself. This room is so cold, unlike the others.
I pull the blanket up around me, as much for the cold as for protection. It’s not like I can hide my fear. He knows. He knows the real truth. Knows everything now.
My dress is torn and I’m barefoot. He took my shoes away when he put me here. I guess the heels could be used as a weapon. As if I could somehow manage to overpower him.
I try to swallow but the lump in my throat makes it impossible. I’m scared and I hate it. I don’t want to admit it. Not even to myself.
Tears wet my eyes but before they have a chance to fall, I cover them with my hands and rub them away. I don’t want him to see my weakness. He gets off on it.
I did this. I pushed him. And I can survive this. I fucking have to.
It’s when I’m giving myself that ridiculous pep talk that I hear his footfalls in the hallway. Hear his voice, muffled so I can’t make out what he says. Probably dismissing Hugo, his fucking henchman. Like he needs one.
Every hair on my body stands on end when he slides the key into the lock. When he turns it. And when he pushes the door open, it takes all I have not to crumple. Not to cave.
It takes all I have to stand and ready myself for battle against this beast of a man. 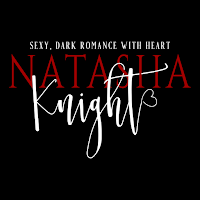 USA Today bestselling author of contemporary romance, Natasha Knight specializes in dark, tortured heroes. Happily-Ever-Afters are guaranteed, but she likes to put her characters through hell to get them there. She’s evil like that.
~AUTHOR LINKS~
WEBSITE
BOOKBUB
AMAZON
FACEBOOK
FACEBOOK GROUP
NEWSLETTER
~GIVEAWAY~
a Rafflecopter giveaway 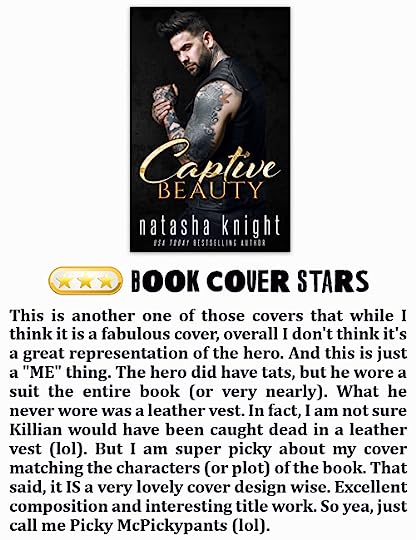 I hate to jinx myself by saying this but I seem to be on a little roll with exceptionally good books lately. I was expecting a fairly straightforward and dark “captive” story but what I ended up with was something much much more. It had depth. It had sadness. It had redemption. It had pain. It had anger. It had a well-developed plot and characters. It was just a really great read for sure.

On top of all those things mentioned above, it was also a very well written book. The pace was perfect. It was a fairly quick read (clocking in at @ 3 hours total reading time). The plot was engaging and as I mentioned above had good depth to it. As this was only the second book I have read by this author (something I will be fixing in the near future) many of the mafia “players” were new to me, but a quick glance through the author’s books show a lot of them already have their own books. That said, I had no problem following along with this story and it works fine as a standalone book. I didn’t find this one particularly angsty and there was no OW/OM drama. The sex scenes were smokin’ and plentiful. There was a small cast of secondary characters that added good extra layers to the plot. I don’t know if HUGO has a book already if he doesn’t I would love to see him get one. As well as Cilla’s brother Jones.

Both the main characters were very likable. Kill (Killian) was sexy as f-ck. Alpha. Bada$$. Dark. Brooding. But vulnerable when it came to Cilla. Cilla (Priscilla) was a broken soul. In the beginning, she comes across sassy and feisty. Strong willed. But the more the book progresses the more her past is revealed, and it’s an awful and sad past. In fact, both these characters have tragic pasts that have defined their lives. The on page chemistry and feelings between them is off the charts though and their journey to healing each other was a pleasure to read. Last, it was all wrapped up in a couple sweet epilogues. I assume we will probably see this couple again at some point in other books so the epilogues we were left with (HFN) were satisfactory. Not much left to say, really. Another cracking good read and yours truly is giving this one two HUGE thumbs up.

In a matter of days, the world changed for Rutherford Street, known as Rack by his military buddies. His younger brother, working border patrol, is brutally gunned down by a drug cartel and two days later Rack’s best friend, Nick, …READ MORE

RELEASE BLITZ & REVIEW — Until I Fall By Claudia Burgoa

Title: Until I Fall Author: Claudia Burgoa Genre: Adult Contemporary Release Date: April 3, 2017   Blurb ER doctor, Aspen Zimmerman is no stranger to pain and loss. The tragic death of her fiancé catapults her life into a promise …READ MORE

Title: ANONYMOUS Author: L.P. Dover Genre: Romantic Suspense Standalone Release Date: April 23, 2018   ~SYNOPSIS~ My name is Elizabeth Kingston and this is where my story begins. I never thought my life could be ...READ MORE