~SYNOPSIS~
I’m filthy rich … and ruthless.
I live for the hunt. The chase.
My desires aren’t exactly normal.
But neither is she … The girl I bought.
She’s innocent and blind.
Perfect for all my wicked needs.
Perfect to prove just how far I’m willing to go.
But there’s just one problem …
I’m falling for her. Deep. Hard. Fast.
Even though I’m the bad guy. The man who keeps her locked away.
I’ll do anything to make her stay.
One thing’s for sure … She will be mine.
WARNING: This book contains very disturbing content that may be offensive to readers.
~BUY NOW~

~EXCERPT~
“Were you … hurt?”
He sucks in a breath.
There’s a pause which feels like an eternity.
Then he whispers into my ear. “Is that what you want?”
I hold my breath as his tongue dips out to lick the rim of my ear.
“No,” I reply, my voice shaky.
“I don’t believe you … I know you hate me,” he whispers, planting one hand above me on the wall. The other snakes up my arm. “You don’t have to fear me. I won’t hurt you.”
I don’t know if I can believe him.
If he’s really washing out blood … whose is it? Did he get into a fight with someone?
Or is he lying to me?
A soft moan leaves his mouth and he whispers, “It’s hard to resist … So hard.”
Hard to resist … what?
Me?
“Keep pushing me,” he adds.
Is it a threat or an invitation? I can’t tell.
Until he opens his mouth. “I like it.”
What kind of person says that?
After being caught doing … this?
“Who … who are you?” I ask. The question just slipped out of me.
But I can’t stop wondering why he’s cleaning in the middle of the night.
He smiles, his hand moving up my neck … all the way to my cheek, where he caresses me. His fingers leave a slick trail on my skin.
“Don’t ask questions you don’t want to know the answer to…” he says, as his tongue dips out to lick his lips. I can hear him smile. “Like I said … it’s none of your business. Trust me when I say, you’re better off not knowing.”
My lips begin to tremble.
His fingers brush down my chin and then let go.
I feel like he just slid his tongue down my throat.
Like he just groped me.
Tongued me.
And I let him.
Even though none of that really happened.
It just played out in my mind.
And it’s so fucked up, that the moment he lifts his hand off the wall, I bolt.

Clarissa Wild is a New York Times & USA Today Bestselling author, best known for the dark Romance novel Mr. X. Her novels include the Fierce Series, the Delirious Series, the Stalker Duology, Twenty-One (21), Ultimate Sin, Viktor, Unprofessional Bad Boys Series, RUIN, Indecent Games Series, Father, and Caged. She is also a writer of various erotic romances. She is an avid reader and writer of sexy stories about hot men and feisty women. Her other loves include her furry cat friend and learning about different cultures. In her free time she enjoys watching all sorts of movies, reading tons of books and cooking her favorite meals.
Want to get an email when my next book is released? Sign up here to receive 4 FREE short stories: http://eepurl.com/FdY71 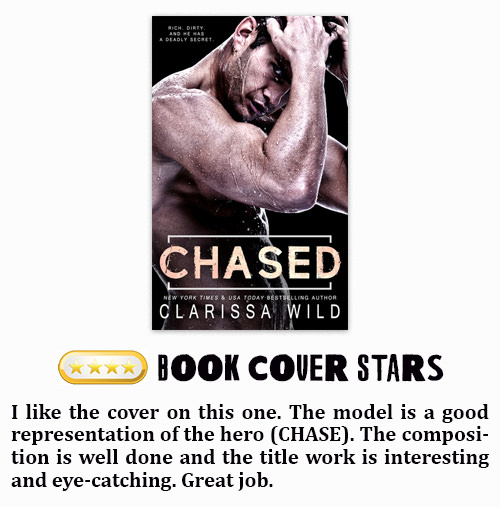 ~WRITING – PLOT – PACE~
Well…well…well. Although I quite enjoyed the first book(s) in the series I really did not like book two so I admit I went into this one with a bit of trepidation. Turns out I didn’t have anything to worry about because this one turned out to be BY FAR my favorite book of the series. It was very well written. The pace was perfect. The plot was engaging and kept me turning the pages. There was a nice twist that I didn’t see coming. In fact, I actually thought the author was going in the direction of one of my most HATED plot devices. I was getting myself prepared to be grossed out and pissed off. Thankfully, she didn’t go there, so all was good. Last, it was all wrapped up in an OK ending. Personally, I would have liked to have seen a further into the future look at this couple. But maybe more books will be coming?

~HERO~
CHASE…I LOVED him. I *think* he was around 40. Didn’t seem to be a manwhore. He was alpha. He was sexy. He was batshit crazy. He was a killer with a conscience. He was smitten with Syrena right from the beginning. I loved his friendship with Brandon. Basically, he was just a really great albeit twisted hero.

~HEROINE~
SYRENA…I loved her character just as much. She was blind. I *think* she was around 20. Not a virgin. She was feisty. She was a fighter. I loved how much she cared about Cage and Ella. That said, she did annoy me just a TINY bit near the end. But I also understood her hurt and anger. Just as a side note in regard to her blindness I DID find it a bit hard to swallow that she was waitressing and cleaning a bar. That just seemed to be a bit far-fetched to me. But it didn’t bother me enough for it to take away from my enjoyment of the story.

~SECONDARY CHARACTERS~
There is really only one secondary character worth mentioning in this one and that is Brandon. He intrigued me A LOT. And I loved his and Chase’s fucked up friendship. I have my fingers crossed that MAYBE the author has plans to give him his own HEA.

~ANGST LEVEL~
Low. I didn’t find this one angsty in the least. There also was no OW or OM drama. In fact, there really was no mention of either main characters sexual past apart from maybe a couple generic mentions. I wouldn’t say this was insta-lust but it was pretty damn close as there wasn’t much push or pull.

~IN THE END~
As I said I LOVED this one. It was far and away the best book in the series (IMO). Great writing. A great plot. Likable and intriguing characters and lots of hot sex. What more can you ask for? Yours truly gives this one two solid thumbs up.