Holden sees things.
Lots of things.
Things we would call ugly, but he believes are beautiful.

He paints sad pictures.
And strums lonely guitars.
He drowns out the taunting voices while shunning the expected norms.

I let them hurt him.
I wasn’t strong enough to speak out.
I hurt him, too, only to prove I wasn’t just like him.

But then I saw him.
I heard him.
I learned why Holden wasn’t CRAZY like they said.

I loved him MADLY.
I fell for him DEEPLY.
And alone, I decided to save a man who was the most beautiful of us all.

Lily White is a dark writer who likes to dabble on the taboo side of eroticism. She is most known for her Masters Series (Her Master’s Courtesan and Her Master’s Teacher), Target This, Hard Roads, and Asylum. She’s co-authored Serial (a four part serial series). When she isn’t writing as Lily White you can find other books by her under M.S. Willis where she has penned the Control Series, the Estate Series, Because of Ellison (contemporary romance), and Standard Romance Story (Romance Comedy). Lily enjoys stretching her writing muscles by continuing to challenge herself with each book she publishes.

In addition to writing, Lily is an avid reader, gummy bear slayer, and a gold medalist in puppy naps. 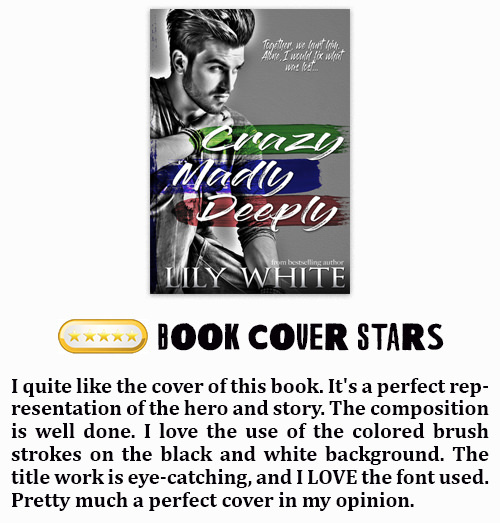 ~WRITING – PLOT – PACE~
I seriously LOVE this author. L-O-V-E her. Every book I read by Lily is different from the previous. And in this one, we are treated to a heartbreaking and original romance between two broken souls from different sides of the tracks. And of course, it wouldn’t be a Lily White book without it including one hell of a twist. I am RARELY surprised by twists, but this one left me going WTF??!! As always with this author the writing was superb. The pace was a little iffy for me and this is why I couldn’t give it a perfect 5-Stars. It felt a bit too long for me and the middle part dragged. That said, the plot was still engaging enough that I never felt the need to skim. It was quite an emotional book that will have you reaching for the tissues often. Last, it was all wrapped up in a satisfying conclusion.

~HERO~
HOLDEN…Holden was pretty much a perfect hero. My heart shattered for him several times throughout this book. He was sweet. He was respectful towards women. He was an outcast and fine with being one. He loved his sister Deli. He looks past Michaela’s weakness to see the broken girl underneath and then he gave her his forgiveness and love. <— honestly not sure I would have done the same. I really just completely loved his character.

~HEROINE~
MICHAELA…Michaela was a bit more of a mixed bag for me. I struggled with how weak she was for a good portion of this book. She just let Jack and pretty much EVERYONE roll right over her and in doing so she ruined peoples lives. Now I get she herself was being abused, so I understood. But she never reached the perfectness that was Holden for me. That said, she does FINALLY find a backbone and the way she stands up for Holden did win her a lot of extra brownie points.

~SECONDARY CHARACTERS~
There were some good secondary characters in this one. I loved Holden’s sister Deli. I hated Jack with a passion. Both Dr. Silva and Angela were great. Each one added an extra layer of depth to the story.

~HEAT LEVEL~
Low. This is pretty much what I would call a slow burn romance. I don’t remember exactly at what point these two have sex but it was fairly late in the book. The sex scenes while good, were also more of the tame side. I am usually not a fan of slow burns but the lateness of the sex and the tame scenes were well matched to the story, so I wasn’t bothered by it.

~ANGST LEVEL~
Medium. I actually didn’t find this particularly angsty. It was emotional. Very emotional, but it wasn’t the type of angst that has you biting your nails or your stomach in knots. There was a bit of OW drama in the form of a f-ck buddy of the hero’s wanting more. Drama might be a stretch as after Holden tells her he doesn’t want more she simply disappears. Now, this is one of those times that I felt this OW didn’t really serve a point in the story. Especially since she is weirdly NEVER seen or heard from again when she works at the same place as Holden (and later Michaela). Not to mention Angela owns the place. I found it incredibly odd that she was never mentioned again. Especially with all the stuff that went down near the end. There is also some OM drama in the form of Michaela’s boyfriend Jack. Neither were virgins and the past sex life talk is kept to a minimum.

~IN THE END~
I really enjoyed this one a lot. It wasn’t perfect but the issues I had were really only small things. The writing was great. The plot was original. The characters were well developed. I cried. I smiled. I cursed. I cheered. I fell in love with Holden. I forgave Michaela. I wanted to high five Angela. It was an amazing book, therefore, yours truly is going to give this one two HUGE thumbs up.

Bastards & Whiskey by Alta Hensley IS LIVE! FREE with #KindleUnlimited     Amazon → http://amzn.to/2w578nP     ~SYNOPSIS~ I sit amongst the Presidents, Royalty, the Captains of Industry, and the wealthiest fucks in the world. We own Spiked …READ MORE

The Wild By K. Webster Publication Date: August 7, 2017 Genres: Adult, Contemporary, Romance, Taboo   SYNOPSIS I brought them to the wilderness because we couldn’t cope with our reality. The plan was to make ...READ MORE