DO NOT MISS THESE BOOKS!

“This edge of your seat read will have you flipping fiendishly through the pages and begging for more.” -USA Today Bestselling author Lili Valente

I am the ghost that haunts your dreams. I am a liar, a protector…a killer…I am death.

You think you know my story, but you have no idea. My death was just the beginning.

In the years since I escaped the shadow organization that owned me, my vow to protect my family is the only thing that kept me alive.

Until I meet her.

Too bad I need the monster to protect her from the demons of her past.

Too bad she’s not that innocent.

Cliffhanger Warning: I know you want the whole story right now. But that’s not how things went down. And I think you know by now when it comes to ORUS, things don’t always go according to f*cking plan.

(The Deep Duet unfolds over the course of two books. Deep will be followed by Deeper, releasing on January 29th)

THE SEQUEL IS COMING ON JANUARY 29th!

I fell in love with the boogeyman.

For ten years I have plotted and planned my revenge against the man who was all shadow and death. He took the most important thing in my life away from me and I meant to return the favor.

Except, I was wrong…

**THIS IS NOT A STANDALONE, YOU MUST HAVE READ DEEP FIRST**

USA Today Bestselling Author, NANA MALONE’s love of all things romance and adventure started with a tattered romantic suspense she borrowed from her cousin on a sultry summer afternoon in Ghana at a precocious thirteen. She’s been in love with kick butt heroines ever since.

With her overactive imagination, and channeling her inner Buffy, it was only a matter a time before she started creating her own characters. Waiting for her chance at a job as a ninja assassin, Nana, meantime works out her drama, passion, and sass with fictional characters every bit as sassy and kick butt as she thinks she is.

The books in her series have been on multiple Amazon Kindle and Barnes & Noble bestseller lists as well as the iTunes Breakout Books list and most notably the USA Today Bestseller list.

Until that ninja job comes through, you’ll find Nana working hard on additional books for her series as well as other fun, sassy romances for characters that won’t leave her alone. And if she’s not working or hiding in the closet reading, she’s acting out scenes for her husband, daughter, and puppy in sunny San Diego.

Want to hit me up? Just email me: nana@nanamaloneromance.com

NYT & USA Today Bestselling author M. MALONE lives in the Washington, DC metro area with her three favorite guys, her husband, and their two sons. She holds a Master’s degree in Business from a prestigious college that would no doubt be scandalized at how she’s using her expensive education.

Independently published, she has sold more than 1/2 million ebooks in her two series THE ALEXANDERS and BLUE-COLLAR BILLIONAIRES. Since starting her indie journey in 2011 with the runaway bestselling novella “Teasing Trent”, her work has appeared on the New York Times and USA Today bestseller lists more than a dozen times.

She’s now a full-time writer and spends 99.8% of her time in her pajamas.

Find them both at www.malonesquared.com 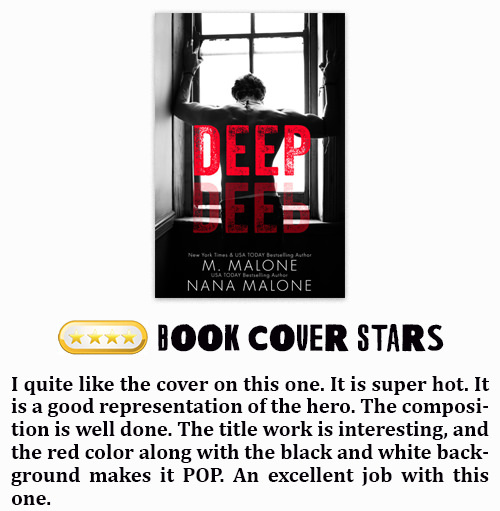 I’ve been enjoying this series quite a lot and RAFE has intrigued me since the moment he was introduced so I was very much looking forward to his book(s). Alas, this one was just OK for me. I’m not a big fan of secret revenge plots to begin with and this one drags out the entire book. On top of that, I did not find Diana likable in any way. Maybe it is because I adore Rafe. Maybe it was because I thought she was a bit of an idiot. Maybe it was because her lies almost got an innocent man killed. I don’t know. I wanted Rafe to use his brain and figure out she was playing him and toss her out on her lying ass. Hopefully, she will make a better impression in book two…

Those issues aside, the writing was still fantastic. It was nicely paced. The plot was engaging (if a bit frustrating) and kept me turning the pages. There wasn’t any OW/OM drama. The sex scenes were suitably hot. I love all the secondary characters. I always love getting glimpses of previous couples and the guys that work for BLAKE SECURITIES. I loved Rafe. I wanted him to catch a clue SOOO badly. Diana as I have already mentioned, I could not stand. I hated her lying to Rafe and everyone. I hated that she seemed so clueless about her father and brothers. I found nothing remotely likable about her. I am hoping I will warm up to her in book two (fingers crossed). I also had a hard time connecting with them as a couple. This is where my dislike for “secret” plots comes in. I just can’t buy into a couple when one or both is lying about EVERYTHING. Especially when the relationship becomes intimate in nature. Trust is a HUGE part of a lasting relationship so I always have a hard time believing in an HEA for a couple when that plot device is used. Last, it’s all wrapped up in a cliffy that is leading us (hopefully) into less deceit and a more honest relationship. So this one was a bit of a mixed bag and my least favorite of the series so far. That said, I am still onboard for book two.

~SYNOPSIS~ To high-end defense attorney Henry Garrison, Win Hughes is a woman he met during one of the most trying times of his life. She’s soft and warm, and he finds solace in their brief relationship. But Win has …READ MORE

Coming April 20th Amazon iBooks Google Play Kobo Nook   One look, and I know I’ll have her. One taste, and I’m insatiable. One wrong move, and I’ll lose her forever.I’ve never met a woman who was worth the time …READ MORE