Dan might be the enemy of my enemy, but I’m not sure that makes him my friend. He’s definitely not my ‘step brother’, no matter what everyone at school says. Honestly, I don’t know what he’s supposed to be to me. Or what he’s becoming…

Fact: for every action, there is an equal and opposite reaction.

In the yearbook, I’ll be Sophia Ramos: Valedictorian. Years of honor roll certificates, AP classes, and lugging around an obnoxiously large cello case are about to finally pay off. If everything goes according to plan, I’ll escape these decaying suburbs for a top university across the country.

The problem? A few years ago, my mom met someone just as broke, just as drunk, and just as impulsive as she is. Approximately five seconds into their relationship, they decided it would be an excellent idea for him—and his son, Dan—to move in with us. (Spoiler alert: it wasn’t).

Now I share a house with none other than Daniel Cole. Even though Dan dropped out two years ago, he’s still the tattooed, bad boy, heartthrob, legend of St. Anthony’s Academy. He and I aren’t supposed to have anything in common.

Living together means war. First, Dan and I were at war with each other. Now, our rivalry is giving way to an unlikely alliance—two opposing sides teaming up against a common enemy: our respective parents.

Which is to say, we’ve been hanging out.

Question: What happens when an unstoppable force meets an immovable object

Here’s the thing: My brain is a complex organ. One hundred billion neurons, each with an average of seven thousand synaptic connections to other neurons. My brain is my ticket out of here.

My heart, by contrast, is a pump. It moves blood around.

I know Dan is off-limits. I know I shouldn’t do something I’ll regret. And I know how much is at stake (my family, my future).

So why can’t I stop thinking about him? Those inscrutable jade eyes. The smile that can say a thousand different things at once. That tattoo curving across his abs…

Even though I know better, I feel that pounding in my chest. And it’s getting harder to ignore.

But if I follow my heart, I can never go back.

Answer: There is no such thing as an immovable object. 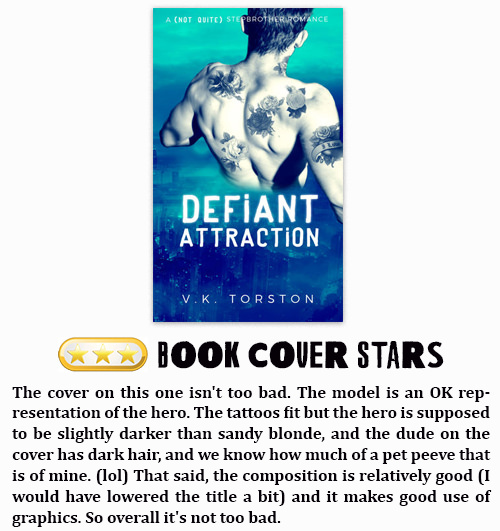 So color me impressed because this is V.K. Torston’s debut book and it was a very good debut indeed. It was a fairly quick read. It was very well written and well paced. The plot was engaging and had a lot more depth to it than I was anticipating. To be honest, I saw STEPBROTHER and figured it would be a light, flirty, skim the surface type of read. It was so much more than that. The journey of self-discovery both these characters take will break your heart one minute and have you smiling the next.

Although both these characters are young, this book wasn’t young adult. We get some hot sex scenes between these two. Some angst. Some violence. I loved both Sophie and Dan. Both were strong characters with big hearts connected through a shared history of dysfunction. There wasn’t a ton of secondary characters, but the ones that do feature added some excellent intensity to the story. There wasn’t any OW/OM drama, and it was all wrapped up in a nice happy for now ending. 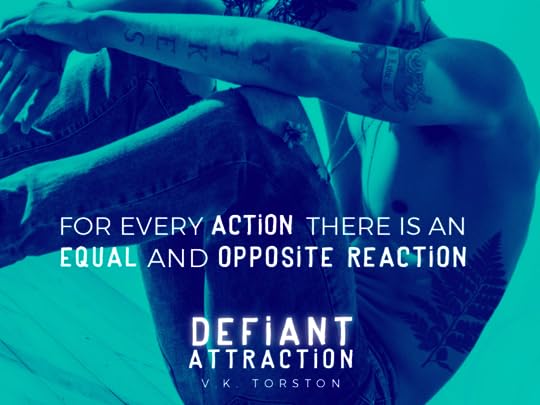 A couple of things kept this from being a complete hit. One, I wish we would have gotten a bit more background on both main characters. I would have liked to have seen some of their interactions before they transitioned into a “couple.” It’s mentioned briefly that Dan used to sell drugs and had a pretty checkered past. I think it would have given the characters an extra layer of development. My other issue is I would have liked to have seen a further into the future epilogue for these two. Marriage, babies, college degrees, etc. That said, yours truly was impressed with this one so I am giving it two solid thumbs up and I look forward to reading more from this author.

V.K. Torston is a millennial and ‘cool aunt’ to a brood of nieces and nephews. She was born and raised in San Francisco, attended university in New York City, and aspires to one day live in London. A veteran of the independent music scene, she began writing nonfiction in her late teens. Then she realized that making up stories was way more fun than coming up with endless synonyms for ‘frenetic’ and ‘danceable.’ Her hobbies include drinking too much coffee, making up stupid songs, and ranting about current events. Defiant Attraction is her first novel.

♥ ♥ ♥ Kiley Kepner, the perennial bad girl of Hollywood, finally meets the men that can tame her, but will she get her happily ever after? ♥ ♥ ♥ ♥ ♥ ♥ Maggie Marr is the USA Today Best-Selling …READ MORE

Title: Vengeance Author: Isabella Starling  Genre: Dark Billionaire Romance      First came wrath, Ruining everything in its path.   She lost it all and wound up alone, And his life turned his heart into stone.   Daddy taught his …READ MORE

PLEASE NOTE — LINKS ARE UPDATED AS BOOKS BECOME AVAILABLE! Eve1972Hi there! I’m a mom and wife by day (and night), aspiring writer (in my dreams), and an avid reader (every day of the week). ...READ MORE

Today is our stop on the blog tour for The List by Tawna Fenske! Check it out and grab your copy today! And be sure to enter Tawna’s giveaway today!    Synopsis It all ...READ MORE

The Five By Lily White