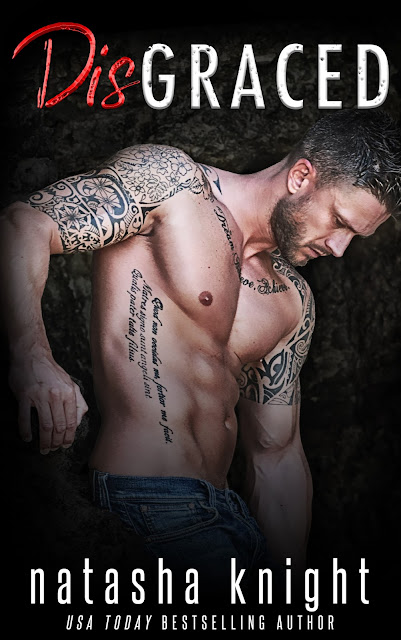 Title: Disgraced
Author: Natasha Knight
Genre: Dark Romance
Release Date: May 26, 2017
Blurb
Disgrace: the condition of one fallen from grace.
She is my forbidden fruit. The one temptation I cannot resist.
The first night…
I rescued her from an attack in the seedy underground of New York City.
The second night…
She told me the first of many lies.
She thinks she can keep me out of her world, but she’s in over her head.
Watching her, being near her, it gives breath to something dark inside me.
Something primal and forbidden. Forbidden to me.
Because in six months, I’ll be an ordained priest.
And she complicates things.
She thinks she is my disgrace. Truth is, my fall had begun the moment I’d laid eyes on her.
ADD TO GOODREADS

Author Bio
USA Today Bestselling author Natasha Knight writes dark romance as well as spanking romance in a variety of genres including contemporary, paranormal, post-apocalyptic, science-fiction and fantasy. She is a #1 Amazon Bestseller in multiple categories forever searching in every story for that single most important element of love. All of her stories contain at least one kinky Alpha male, lots of dirty talk and a well deserved happily ever after.
Author Links
WEBSITE
FACEBOOK
NEWSLETTER
AMAZON
GOODREADS

I am pleased to see the author has changed the cover for this one. The new one is 100000 times better in my opinion!

I had to go back and check because I was SURE I had read at least one book by this author previously but low and behold I had not! Clearly, that is an oversight I will be correcting in the very near future.

I LOVED this book. The writing was fantastic, and the plot was engaging. The pace was (mostly) spot on. It was sexy and dirty. It had twists and turns. It had action. It had angst. It had drama. It had secrets. It had interesting secondary characters. Sofia and Raphael from Dishonorable feature somewhat in it. I haven’t read that book YET but if you have then I am sure you know that the hero of this book is Raphael’s twin brother and the heroine is Sofia’s sister. We also get a brief glimpse at Raphael and Damon’s brother Zach. Call me intrigued to read more about him.

Both main characters were extremely likable. I did think that Lina came across a bit…too stupid to live naive at times. Especially concerning her interactions with the Russian mob but I found her an enjoyable heroine for the most part. Damon…now Damon was HOT. He was Dominate and angry and spanky. All things I love in a hero.

So like I said I enjoyed this one. It was just about a 5-Star read. I did find that after the BIG drama the book dragged a little for me. Probably the last 20% or so could have moved along a little faster. In any case, this still gets the huge two thumbs up from yours truly.

Have you not yet met Roman Cavenaugh, or do you want to share him with a friend? USA Today bestselling author J.L. Berg’s BEHIND CLOSED DOORS is on sale for just .99c for a very limited time! Find out more …READ MORE

RELEASE BLITZ — All of You All of Me By Claudia Burgoa

Title: All of You All of Me Author: Claudia Burgoa Genre: Adult Contemporary Release Date: August 9, 2017   Blurb One heinous tragedy changed my entire family forever.  That morning, my world crumbled. I lost my parents. Now, I live by …READ MORE

COVER REVEAL — Hunted for the Holidays By Amber Bardan

It should have been an innocent vacation with my family. But wild and dangerous things lurk in this forest.A wild and dangerous man.Stalking me.Hunting me.Terrifying me—because all I want these Holidays is to be caught. Warning: This short romance is …READ MORE