I am the shadow that haunts the night. I am a hunter, a protector…a force for good…I am Jonas Castillo.

And now that she’s mine, I’m never letting her go.

If only she would let me protect her…Seeing the fear in her eyes, makes me want to do the one thing I’ve vowed never to do again… kill.

But I’ll do anything to protect what’s mine.

The finale of The Force Duet. Must be read AFTER the first book, Force.

~EXCERPT~
When he brought her head down for a kiss, JJ couldn’t help but moan. His tongue slid over hers easily and she whimpered. Jonas nipped at her bottom lip before sucking on it gently. Her lips tingled, the pleasure flowing white hot through her, and she wondered if she might be able to come just from his kisses. And if not, the delicious rub of his cock against her sensitive flesh would do the trick.
One of his big hands gripped her ass, gently rocking her into him as he devoured her mouth. With every rock of their hips together, they both made this satisfied, muffled mmph sound. As if that was exactly what hit the spot, what they both needed.
Holy hell. She was close and so far all he’d done was kiss her. But it was more than that. The tension between them was so thick, winding tighter around them with each moment.
She wasn’t an idiot. She knew there was still a lot of underlying tension with Rafe. After all, Rafe had tried to kill him before. But she’d had no idea that he would respond like this. Any feelings she’d ever had for Rafe were a schoolgirl crush. That crush didn’t come anywhere close to what they shared. Not even close. But how they hell did she drive that message home?
At that moment, he was acting like a caveman with a need to mark her… not that she minded. She trusted him. He wasn’t going to hurt her. She just didn’t want him thinking that any part of her wanted anyone else.
Jonas tore his lips off of hers, panting as his gaze bore into her eyes. With a muffled curse, he flipped them so that he lay on top of her, his hips fitting in that space she made just for him between her thighs. “You are the most beautiful woman I’ve ever laid my eyes on. And you’re mine. If you’re gonna tell anyone to sit and spin it’ll be me. Is that clear?”
JJ nodded as she reached for him, making this little mewling sound in the back of her throat. Was that really her? Sounding needy and desperate? “Okay, Jonas. Just—”
But it was like he couldn’t hear her. Against her skin, he whispered, “Did you know how many times I used to dream about touching you? About all the ways I could make you scream my name?”
“Jonas—”
He kissed behind her ear as he rocked his cock against her heat. “I used to spend a lot of time in the shower every morning and night thinking about you. About how you’d taste, how your breasts would look soaped up. About how bad I wanted to lick you everywhere. And when I’d take my cock into my hand, I’d pretend it was you sliding your fingers over me, making me feel good. I’d pretend you were squeezing just how I like, bringing me to my knees. I’d pretend you were slick, and wet, and ready for me, begging me to make love to you.” He nipped at her skin. “And every time I came, it was your name I’d call.”
JJ arched her back. Her brain offered up the mental image of him stroking his thick erection, squeezing tight as he pulled the skin taut and groaned out her name. “D-do you always use my name when you’re touching yourself?”
He rocked his hips into her as he kissed the column of her throat. “Yes. Most of the time I imagine you’re there, touching me. Wrapping those gorgeous lips of yours around me. Sucking me as you blink up at me, adoringly. And while I’m sliding into your mouth, I’m telling you all the dirty things I’m going to do to you.”
Dirty talk—she was a fan. If this was what happened every time Jonas got pissed off, she’d maybe have to push his button more often. 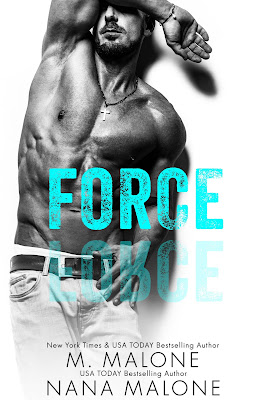 NYT & USA Today bestselling author M. Malone lives in the Washington, DC metro area with her husband and their two sons. She holds a master’s degree in Business from a prestigious college that would no doubt be scandalized by how she’s using her expensive education.

Independently published, she has sold more than 1/2 million ebooks in her two series, THE ALEXANDERS and BLUE-COLLAR BILLIONAIRES. Since starting her indie journey in 2011 with the runaway bestselling novella “Teasing Trent,” her work has appeared on the New York Times and USA Today bestseller lists more than a dozen times.

USA Today bestselling author Nana Malone’s love of all things romance and adventure started with a tattered romantic suspense novel she “borrowed” from her cousin.

It was a sultry summer afternoon in Ghana, and Nana was a precocious thirteen. She’s been in love with kick-butt heroines ever since. With her overactive imagination constantly channeling her inner Buffy, it was only a matter a time before she started creating her own characters.

While she waits for her chance at a job as a ninja assassin, Nana works out her drama, passion, and sass with fictional characters every bit as brazen and kick-butt as she thinks she is.
WEBSITE
FACEBOOK
TWITTER

Good lord this cover is SMOKIN’. Similar to book one’s cover so my thoughts are basically the same. Excellent representation of the hero. Jonas remains hot y’all. Great composition. Attractive and eye-catching title work. Five lick worthy stars for sure!

Oh, good gravy was this book good. The best of the series so far (IMO). The writing was fantastic. The pace was perfect. The sex scenes were smokin’. It had the perfect blend of romance and action. It had humor. No OW/OM drama. No angst or drama (couple wise). Fantastic secondary characters. I REALLY hope Matthias’s book is up next. Two extremely likable main characters. A badass Nonna. All wrapped up in a kick-ass ending.

Not much left to say really. I am loving this series and cannot wait to see what these authors have up their collective sleeves next. Two HUGE thumbs up from yours truly. P.S. Authors, if you are reading this, I would LOVE to put a request in for IAN to get his own book. Pretty please!! With sugar on top!