Jayne Frost’s bad boy rockstar romance LOST FOR YOU is now available! Grab your copy today!
Be sure to enter the giveaway for a $25 Amazon gift card at the end of this post!

I’ve been clean for years. But now my addiction has a face. Her face…
At eighteen, I stood at the precipice of stardom. I had the record deal. And the tour to back it up. But I succumbed to the pressure of that life. The dark side.
Now, I skate on the fringe. My brother is the genius guitarist for the band Caged, and I’m the one who helped make that happen. I’m happy to run my bars and my land development company.
Sure I am.
And then I meet her—Taryn Ayers—the music manager behind the three biggest bands in the country. She doesn’t know I’m Cam’s older brother. Or that I’ve got a secret that makes
her world and mine fundamentally incompatible.
Problem is, I want to know Taryn. I crave her as much as any drug.
But can I risk letting her know me?

Lost For You is a STAND ALONE New Adult Romance.
Intended for mature audiences due to hot as sin rockstars and the world they live in.
**Please note: This book contains instances of drug use.**

At the subtle shift in energy, I pulled Taryn to my side. She kept her head down as I spun us toward the main floor. When we emerged on the other side of the bar, I ushered her through the door marked No Admittance and into the hallway that led to my loft.

“I shouldn’t have come,” she said, her breath uneven. “Do you have a back entrance?”

I rounded on her, and when I caught sight of those eyes, impossibly large as she blinked up at me, I couldn’t help myself.

My mouth crashed into hers, my tongue demanding entry as I maneuvered her against the wall. Her lips parted on a gasp. But then her hands were in my hair, and it was all hot breath and soft moans. And fuck, the taste. Like strawberries fresh from the vine.

“Fuck, you’re sweet.” My palms glided up her sides, inching towards her breasts. “I knew you’d be sweet.”

Her little pants warmed the hollow of my neck. “So are you.”

I stroked her jaw with the pad of my thumb, and even in the dim light, I saw the flush color her cheeks.

Jayne Frost hails from Texas (by way of California), currently living in Sin City.
A romantic by nature, she believes in fairytales and happily ever afters. And music. Because the best stories always have a soundtrack. 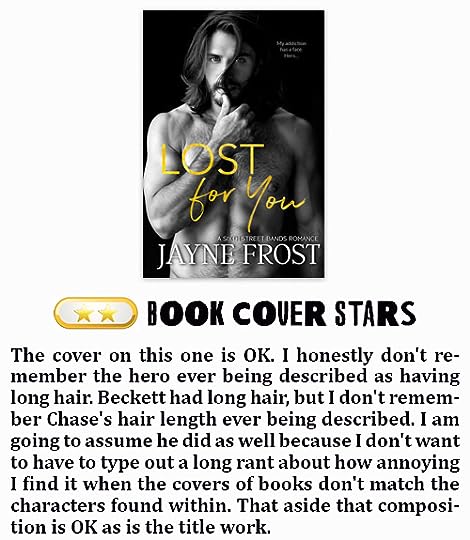 This review will likely be all over the place and not make a lot of sense. This book was angst on steroids and depressing as hell. I did not enjoy it one bit. None of the characters were particularly likable and even by the end I didn’t care if any of them got an HEA or not. BUT at the same time, I found myself consumed with the story and desperately turning the pages. So clearly I have a bit of a conundrum here…

The writing was fantastic. The pace was fantastic. I was never bored or felt the need to skim. The plot was engaging and like I mentioned above had me turning the pages. It wasn’t a happy-go-lucky read though. It was raw. It was dark. It was real. It was depressing. I guess there was redemption and hope to be found near the end, but for me the heaviness of the plot that comprises most of the book just overshadowed everything. Like I said above, this one was full on angst and drama. There really wasn’t any OW drama but there was definite OM drama. There was a good cast of secondary characters and Taryn and Chase were OK. I just found none of them particularly likable. I found Taryn to be extremely annoying. The way she strung Beckett along. Yes, she repeatedly told him it was over in words, but her actions said anything but that. Chase was OK. I mean there wasn’t anything wrong with him but I just never felt a “love” connection between him and Taryn. Hot sex, yes, but a soul deep connection…NOPE. I felt that more between Taryn and Beckett and their shared history and love. And don’t even get me started on Tori. Chick was a grade A bitch and I have a bad feeling we will be treated to a love triangle with her and Logan and Dylan.

So yea, as you can see from what I have written above I struggled with this one. There wasn’t much I liked about it. Not the plot. Not the characters. The ending felt rushed. But I have to also admit that the author hooked me from the first page. My stomach was in knots. I was cursing. I needed to know how this was all going to play out. I just COULD NOT PUT THIS BOOK DOWN. Right now I am vacillating between 3-Stars or 4-Stars for this one. I think I will go with 3.5 for now with an option to change that upon further reflection.

DUSK, the 3rd book in Jessica Florence’s Hero Society Series is NOW LIVE!!     ~SYNOPSIS~ Dusk has descended. A time for heroes to face their fears. Echo has lived the solitary life of ...READ MORE