There was one rule he couldn’t break…

With the demons in his past, all he wanted was a fresh start. He wasn’t looking for trouble. But trouble tasted so damn good.

There are reasons for the rules…

Malia Adams had a complicated life. Well, actually it was pretty simple. Survive. Stay off the streets by any means necessary. And that was a nightly struggle. She didn’t have time to get involved with anyone.

Especially not the one person she can’t have.

Even if he is sex on a stick.

USA Today Bestselling Author, NANA MALONE’s love of all things romance and adventure started with a tattered romantic suspense she borrowed from her cousin on a sultry summer afternoon in Ghana at a precocious thirteen. She’s been in love with kick butt heroines ever since.

With her overactive imagination, and channeling her inner Buffy, it was only a matter a time before she started creating her own characters. Waiting for her chance at a job as a ninja assassin, Nana, meantime works out her drama, passion and sass with fictional characters every bit as sassy and kick butt as she thinks she is.

The books in her series have been on multiple Amazon Kindle and Barnes & Noble best seller lists as well as the iTunes Breakout Books list and most notably the USA Today Bestseller list.

Until that ninja job comes through, you’ll find Nana working hard on additional books for her series as well as other fun, sassy romances for characters that won’t leave her alone. And if she’s not working or hiding in the closet reading, she’s acting out scenes for her husband, daughter and puppy in sunny San Diego.

Want to hit me up? Just email me: nana@nanamaloneromance.com 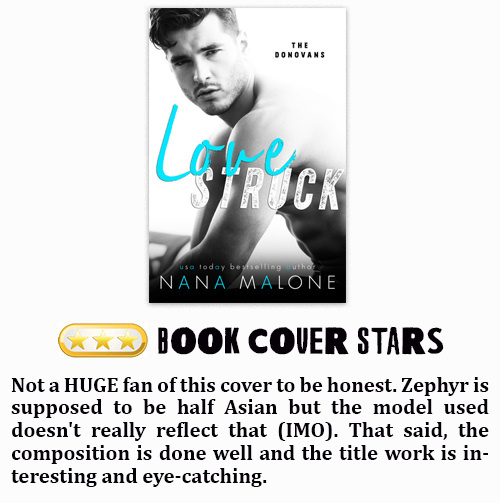 ~WRITING – PLOT – PACE~
I really haven’t been having great luck with books this past week. This one was just OK. There wasn’t anything wrong with it per se but I struggled to stay interested and almost threw in the towel several times. That said, the writing itself was very good. It had a nice easy flow to it. Unfortunately, the pace was snail S-L-O-W and because of that issue, the plot just wasn’t all that engaging. It’s a fairly long book, and that was part of the problem. I think the author could have tightened up the plot a bit thus improving the pace. I also figured out the twist right from the beginning. I haven’t read any of the other books in this series and wasn’t too lost reading this one and I assume we get more background on Zephyr and what happened to him in one of the previous books. But I can safely say this can be read as a standalone fine.
~HERO~
Zephyr…first can I say how much I LOVE that name. It’s awesome. I almost want to have another kid just so I can name him that (lol).  I liked Zephyr a lot. He was a great hero. Smart. Sweet. Sexy. Didn’t appear to be a manwhore. Loving. Wore his heart on his sleeve. Loved his family. He was just a great book boyfriend.
~HEROINE~
Malia…alas I just didn’t love her nearly as much as I did Zephyr. I am not particularly fond of martyr heroines that cut their own noses off to spite their faces. I get I was supposed to think she was this awesome selfless person for working twenty-five jobs, going to school, and sending ALL her money home to help take care of her sister. But let me just say, NO ONE with an ounce of sense is going to choose to sleep on a park bench or in a car when they have friends willing and offering to help them out. So yea, I just found her whole “I can stand on my own two feet” attitude idiotic.

~SECONDARY CHARACTERS~
There was a good array of secondary characters in this one. Friends of both Malia and Zephyr. I enjoyed both Emily and Cooper. We also get some glimpses at people from Zephyr’s family that I assume are from previous books.

~HEAT LEVEL~
Low to Medium. It takes FOREVER for these two to get together. It’s definitely a slow burn romance with no sex until 60% in. I wish I could say the sexual chemistry kept me hooked but by the time they finally did the deed I was already half checked out of the story. After the 60% mark, we go get a few fairly hot sex scenes but nothing overly explicate (IMO).

~ANGST LEVEL~
Medium. I didn’t find this particularly angsty but there is a lot of push and pull. A lot of talk about how they can’t and won’t be together…yadda…yadda…yadda. I found the last bit the most angsty. There is some OW drama as the hero goes out on a date with an OW 55% into the book. Which annoyed me consider these two had already kissed and been dancing around each other for over half the book at this point. The hero dances with this OW and she rubs his crotch. His little guy isn’t interested so the OW moves on. The heroine does see all this. There was no OM drama.

~IN THE END~
Like I said, it was OK. There wasn’t anything that overly bothered me. The writing was good. The characters were likable (for the most part). It had some good feels (especially near the end). It just suffered from being overly long and extremely slow. And as someone who isn’t a huge fan of slow burn relationships, you need to have something else going on in the book to keep me interested and unfortunately, that just wasn’t the case here. Yours truly is giving this one a thumbs up.

Coming March 28th   iBOOKS GOOGLE PLAY BARNES & NOBLE KOBO Amazon   Xander Barrett had it all. Until it was stolen by the devil. His life. His lover. His freedom.A chance encounter secures his release. But, it comes at …READ MORE

The Second Shot By Bethany Maines

RELEASE BLITZ — I Do, Babe By Tillie Cole

Amazon Nook iBooks Kobo   WHEN DARKNESS AND LIGHT COMBINE, DESTINED SOULS WILL IGNITE . . . Connected since childhood.Two souls: one dark and one pure.Bracing to take the greatest step of all. River ‘Styx’ Nash loves his woman. …READ MORE

*** “You’ll have to forgive me, Darlin’, for all the unforgivable things I’m about to do…” Loyalty is never easy – especially when you’re forced to choose between family and the man you would do ...READ MORE