I was a shut-in for a reason. With too many secrets, too much to hide, and way too much at stake, I spent years in my mansion in the woods, never trusting a soul.
So, when a stranger showed up at my door, with her plans to save the world, I should have sent her away, like I’d always done.
From the second she arrived, I couldn’t resist Veronica Cruz. She was everything I’d been missing—passionate, generous, and so damned sexy.
I let her into my life, gave her everything—including my heart.
Now, the one thing she wants is the truth. The question is, will she still love me when she knows my secret?Loving the Secret Billionaire is a sexy standalone novella in the Love at Last series, featuring a virgin hero and a slightly older woman.Originally published in the Rogue Desire anthology, this edition has been expanded with new material.
ADD TO GOODREADS

“I absolutely loved this story about feisty Veronica Cruz.”

“I’m giving this five stars for Adriana Anders work. Her style is beautiful, sexy, and the characters and story were interesting. – Goodreads Review

“Oh, how I loved Zach and Veronica. This story is unique, unexpected and so freaking sexy I absolutely loved it.” – The Book Hammock

“I adored this unique story.” – Chasing Away Reality Book Blog

“Their love story was so sweet and hot. The only problem was that I wanted more of them!” – Jodi, Goodreads Review

“I don’t remember the last time a story made me want to immediately one click everything from an author.”– Michelle Claypot, Goodreads Review

~EXCERPT~
“Why are you helping me?”
I shook my head for a few beats—deny, deny, deny… Which was what I always did. But if I denied it, then she’d leave. And I wouldn’t get another chance.
Now I had to put it in a way that wouldn’t piss her off.
“Seemed unfair.”
“What did?”
“You going it alone against that family.” I didn’t add that I’d gone over their financials—hers and theirs—and those three extra zeros in their campaign coffers seemed like an unfair advantage. I doubted she’d seen my donation yet, or she’d have said something… Although no way could she follow the paper trail back to me on that one.
“That’s so pathetic.” I hated the defeat in her voice.
“What is?”
“You felt sorry for me, so you—”
“Hell, no. That’s not what it is.”
“Well then, what?”
You smell good and your passion gets me hard wasn’t exactly something I could say, so I went with, “You believe in your mission. That worked for me.”
“It’s still pitiful.”
“Is it? You mean the part about being alone or the part where you truly believe in what you’re doing?”
“I don’t… I’m not sure.”
“Because, if you mean being alone.” I waved a hand toward the empty house behind me. “It’s kind of my thing.”
“I’m sorry, I didn’t—”
“I know.” I half laughed. None of this was going how I’d pictured it. Then again, I hadn’t exactly planned this thing out. I’d just gone against all of my own rules and helped a stranger. “I’m not great at joking. In person, at least.”
“In person?”
Crap. Wrong thing to say.
“I uh…spend a lot of time online.”
“Oh. Right.” Her feet shuffled on the porch boards. Was she about to leave?
“Would you…” I cleared my throat and ignored the voice of reason screaming at me to shut up. “Would you like a coffee?”
“Oh no, I couldn’t interrupt your work.” She took a step back.
“You’re not. I mostly work at night.”
“What is it you d—” If she didn’t ask, I wouldn’t have to lie, so I stopped her.
“You want something stronger than coffee? I’ve got beer. Not much else.” I lifted the bottom hem of my shirt and wiped the sweat from my forehead.
“Oh, no, I should—” She exhaled with a strange whistling sound. I dropped the shirt and waited for her to finish. “I’d love to.”
“Come on in.” I said the words, she slid inside, and now it was too late to kick her out, even if I wanted to.
Which I didn’t, though it was clear this was a very bad idea.

Adriana Anders is the award-winning author of the Blank Canvas series. Under Her Skin, a Publishers Weekly Best Book of 2017, has been featured in Bustle, USA Today Happy Ever After, and Book Riot. Today, she resides with her tall French husband and two small children in the foothills of the Blue Ridge Mountains, where she writes the gritty, emotional love stories of her heart. 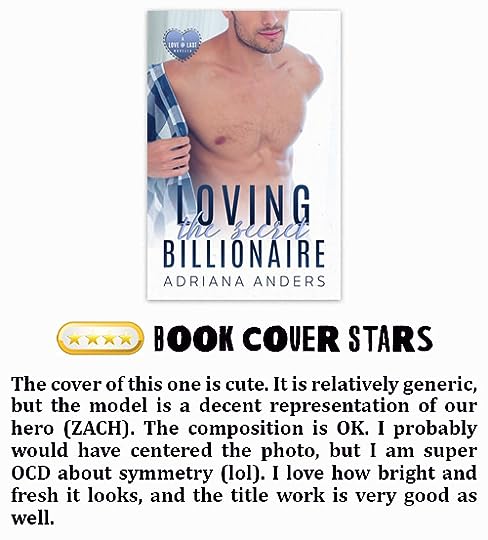 ~WRITING – PLOT – PACE~
Usually, I avoid books with virgin heroes, but this one sounded cute so I thought I would give it a go. Come to find out, it was also an older woman/younger man book (blah). In any case, it turned out to be a cute read. It was super short and was told in dual POVs. The pace was good. The plot was good but held SO much more potential. Everything from the plot to the characters felt underdeveloped. Last, it was all wrapped up in a sweet ending.

~HERO~
ZACH…Zach was OK. He was a 23-year-old virgin. He was blind. He was a shut-in. His character intrigued me a lot and I wish he had been fleshed out a lot more. His background is barely developed. I also thought he was a fairly BETA hero.

~HEROINE~
VERONICA…Veronica was OK as well. She was 28 and not a virgin. Again, her character was WAY underdeveloped. She also came across quite self-righteous near the end.

~SECONDARY CHARACTERS~
There really aren’t many secondary characters in this one. Basically just Veronica’s friend O’Neal. Her book is up next.

~HEAT LEVEL~
LOW. There is just one sex scene in this one and it had a weird awkward feeling to it. (IMO). Probably because the hero was blind and a virgin. It was like the heroine was teaching him. I dunno, it just felt off to me.

~ANGST LEVEL~
Low. Other than the big drama at the end, this was a pretty straightforward insta-lust read. There was also no OW or OM drama.

~IN THE END~
Like I said, it was a sweet read. Just don’t go into it expecting a lot of depth. I think if it had been longer and more fleshed out it would have made for an excellent read. But this will appeal to lovers of virgin heroes and who like their romance books drama free. Therefore, yours truly is going to give this book one thumb up.

Crave To Conquer By Zoey Ellis (Myth of Omega, #1) Publication date: January 15th, 2018 Genres: Adult, Dark Fantasy, Fantasy, Romance     ~SYNOPSIS~ He conquered an Empire – and she’s next. The Alpha Emperor He is known as a ruthless …READ MORE

Your holiday season is about to get deliciously naughty… What if Alice Liddell’s story didn’t happen the way you think? What if it wasn’t Wonderland she fell into, but Winterland. This mad tale is dark, twisted, sexy, and nothing like …READ MORE

COVER REVEAL — Do It Yourself By Nikky Kaye

Amazon US Amazon UK Amazon CA Amazon AU    Sarah began her DIY education by ditching the biggest tool in her garage—her husband. Now she’s realizing that not just her marriage was boring, beige and ...READ MORE