She’s the one woman I should stay away from, but I can’t help myself…

They say being a billionaire has its perks, but I hardly notice. After being widowed, my beautiful little girl is the most important thing to me. Esme hasn’t spoken to anyone but me since her mother’s death. When she goes missing, I’m thisclose to losing it.
When Esme turns up safe and sound with a cute waitress, I’m ready to give the lady a reward and be on our way, but then Esme speaks to her. It’s simple, a mere “thank you”, but I know I can’t let the waitress get away.
Melanie is nothing like the woman who throw themselves at me. Her big brown eyes take my breath away from the minute I lay eyes on her. She fills out her pink waitress uniform with curves I can’t wait to get my hands on. I can’t get her out of my head.
Melanie’s bringing my little girl out of her shell, which means she’s strictly off limits. But having her under my roof and close enough to touch is too much of a temptation. My legendary control is beginning to slip and I don’t know how much longer I can resist breaking every rule I have.
Mr. Control is a HOT romance with heart that will tug at your heartstrings, melt your panties, and leave you begging for more. HEA included! This single dad romance is approximately 62,000 words!
ADD TO GOODREADS

~AUTHOR BIO~
Maya Hughes has always loved romance novels. One look at her Kindle is confirmation. She started writing her first romance novel while pregnant with her third child and she hasn’t looked back. Now, her romance writing addiction has replaced her romance reading addiction.

You can find her writing on her foldable keyboard and phone anytime inspiration strikes. Her sweet and steamy stories range from rock stars to small towns and everything in between. When she’s not writing, she’s playing with her three kids, running errands or vegging on the couch with the love of her life and biggest fan, her husband. 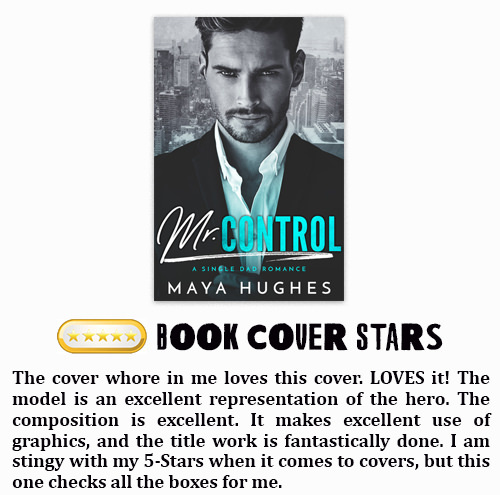 I enjoyed this one for the most part. I thought after reading the synopsis that this was going to be a light, sexy insta-love type read, but it was a rather slow burn with mildly hot sex scenes. So I was a little bummed by the lack of heat, but like I said I still enjoyed it.

The deets…I found it to be well written and well paced. The plot (although a little heavier than I anticipated) was engaging and kept me turning the pages. I wouldn’t say I found it to be overly angsty and there was no OW/OM drama. Like I mentioned above it was a pretty slow burn with no sex until 60% and the sex scenes were more on the mild side. There weren’t very many secondary characters, but I loved both Esme and Derrick. Both main characters were relatively likable. I quite liked Melanie. I loved her interactions with Esme. She was sweet and had a big heart. Rhys was a bit more complicated for me. I loved how he was with his daughter (Esme), and at times he was charming with Mel. But I felt we were promised a hero with this “darkness” that scared women away and had them signing nondisclosure agreements, but except for losing his temper a couple of times, there was nothing dark about him. I’ll be honest with all the talk about his “darkness” and him letting it out and wondering if she would be the woman who could handle it, I was expecting some kink. But no kink, nothing. *shrug*

I also had a couple of other issues that kept me from rating this one higher. There were a few loose ends (the heroines mother for example) that are just kind of left hanging, and the ending was incredibly rushed. From the big fight until the end it felt underdeveloped. Part of the problem is that we don’t get enough of Rhys’s POV about the aftermath of the big blowup. One minute he is a colossal asshole and the next we (HIGHLIGHT TEXT FOR SPOILER) find out he has been trying to contact her for weeks??  I needed a scene where he realizes that he made a HUGE mistake and it has cost him it all. Lastly, there wasn’t enough groveling. He should have been crawling over broken glass and begging for forgiveness from both Mel AND Esme.

So a little bit of a mixed bag with this one. Some good. Some that could have better. But overall this one gets a solid thumbs up from yours truly.

COVER REVEAL — His to Have By Devon Birchley

His to Have By Devon Birchley Publication date: June 27th 2017 Genres: Adult, Contemporary, Romance   SYNOPSIS Fifty Shades of Grey for the Girls generation. Reagan There’s a whole bunch of things I need right now—to feel at home in this …READ MORE

USA Today Bestselling Author J.L. Berg’s FRAUD is available now – and you can get it for a special release week price of just $2.99! Read an excerpt below, enter to win an Amazon gift ...READ MORE