THE PRINCE OF PARK AVENUE FINALLY MEETS HIS MATCH IN A FEISTY MANHATTAN PRINCESS.

I’ve made every one of my billions of dollars myself—I’m calculating, astute and the best at what I do. It takes drive and dedication to build what I have. And it leaves no time for love or girlfriends or relationships.

Or so I thought before an impatient, smart-talking, beyond beautiful heiress bursts into my world.

When Grace Astor rolls her eyes at me—I want to hold her against me and show her what she’s been missing.

When she makes a joke at my expense—I want to silence her sassy mouth with my tongue.

And when she leaves straight after we f*ck with barely a goodbye—it makes me want to pin her down and remind her of the three orgasms she just had.

She might be a princess but I’m going to show her who rules in this Park Avenue bedroom. 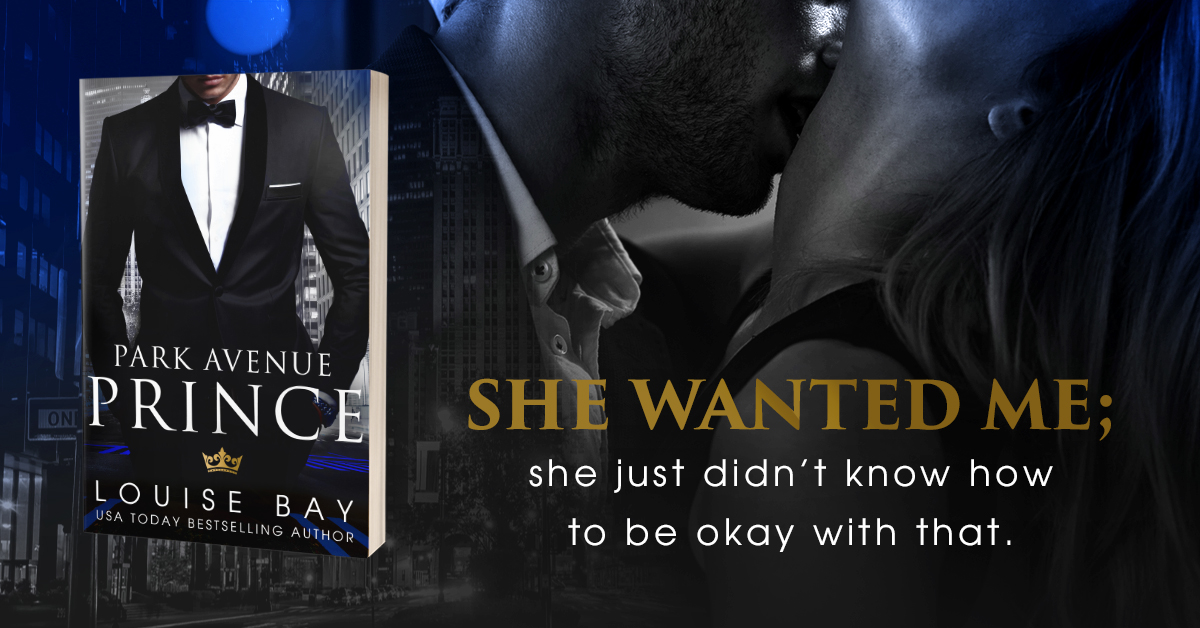 Ruined by bonk-busters and sexy mini-series of the eighties Louise loves all things sexy and romantic. There’s not enough of it in real life so she disappears into the fictional worlds in books and films.

Louise loves the rain, the West Wing, London, days when she doesn’t have to wear make-up, being on her own, being with friends, elephants and champagne.

She loves to hear from readers so get in touch!

Grace Astor grew up on Park Avenue but she is as far from a Park Avenue Princess as you can get. She is determined to make it on her own. At her galleries first opening, an opening featuring the artwork of her cheating ex, Grace meets the intriguing Sam Shaw. Sam knows all about losing things that you hold dear. He learned at a young age not to form connections. Sex is sex, and there is nothing after. That is until he lays eyes on Grace Astor. There is just something about her that has him taking risks he has never taken before.

As these two embark on a love affair can Grace’s love overcome Sam’s fears? Or will the risk be too big for Sam and have him walking away from her forever?

I ADORED Grace and Sam as a couple. As well as individuals. Grace was just a lovely heroine. Down to earth and sweet. I think because of the way the book was written her character isn’t quite as fleshed out as Sam’s. That didn’t take away from my enjoyment of her as a narrator, though. I personally wish Grace would have made him grovel a little more near the end, but that just wasn’t the type of person she was. Apparently not a grudge holder like me. *lol*

Sam’s character had a bit more depth. He was the one with hurts and insecurities shaped by his past. I loved seeing him fall for Grace and struggle at times. Even though his mouth would deny things, his heart knew from the first meeting that Grace was different. I also appreciate that although not a saint we are not bombarded with OW drama or too many details about Sam’s past. It made the journey this couple took that much sweeter.

Nothing much else to say. A fabulous way to spend a few hours and it gets two thumbs up from yours truly.

Title: Defy Series: Sinners of Saints #0.5 Author: L.J Shen Genre: Contemporary Romance Published: February 3, 2017    My name is Melody Greene, and I have a confession to make.  I slept with my student, a senior in high school.  Multiple …READ MORE

RELEASE BLITZ & REVIEW — Away From Me By Lexi Blake

~SYNOPSIS~ Re-released in a second edition with updates. Shattered by the loss of his wife, Callum Reed is a man surrounded by rules designed to protect him. He rebuilds his life with careful discipline, but can’t deny …READ MORE