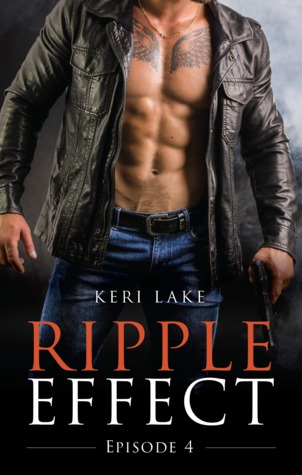 From the author of Ricochet and Backfire comes a dark erotic suspense serial … Episode Four: With every cause, there’s an effect, and Ripley will do everything in his power to keep Dylan safe. To hell with the consequences. Series Synopsis: Ripley They call me RIP. I’m a killer. A murderer. A psychopath. In the eyes of the righteous, I’m a monster, born of sin and depravity. I want to protect her, but I’m not a good man. I want to love her, but I no longer feel. She gets under my skin, though, and has awakened something inside of me. Something I’d kill for. I’m not her savior—not even close. In fact, I’m worse than the hell she’s already suffered. I’m her vengeance. Tit for tat, as they say. And if she’s not careful, I’ll be her ruin. Dylan For months, I’ve watched him. I’ve fantasized him as my savior, my lover. My ticket out of the hell I’ve lived in for the last six years. I never dreamed he’d be my nightmare. Had I known what he really is, I’d have never gotten in the car that night, but life is full of cause and effect. And sometimes the choice on offer isn’t a choice at all. It’s the result of something already in motion, and we’re merely left to survive the ripple effect. *This is an erotic suspense/erotic romance not recommended for readers under the age of 18 due to graphic violence and sex

DYLAN
“Look, I know it doesn’t mean anything to you.  I get that you don’t like the hero stuff.  But I really do appreciate what you did.”  I run my finger along his perfectly trimmed hairline and bend forward to kiss the back of his neck.  I can’t help it.  It’s the first time I’ve attempted affection since his accusation.

He doesn’t react at all.  Doesn’t even look at me, and I’m at a complete loss for how to crack this man.  There are times I feel I’ve touched his soul, only to find I’ve not even breached his skin.
His lack of reaction to me is nothing short of embarrassing—rejection of the worst kind, because I’ve tacked it on to a pathetic gesture of thanks.
“Forget it.”  I step past him and feel a hard grip of my arm that spins me right the hell around.  Twisting my wrist is a fruitless effort in his steel grip, and in spite of my resistance, he pulls me back into him, until I fall awkwardly straddling his lap. I slide back on his legs, and he yanks me forward by my wrists, until I’m fully aware of what must be one hell of a painful bulge between us.  “This isn’t easy for me, you know?  Showing my gratitude.  I’m not used to this shit.  And you make it … impossible!”
“I don’t need your fucking gratitude, Dylan.  It was a job, okay?”
“I’m just a job to you?”  I can’t even believe I’m talking aloud, saying this shit like something straight out of an angsty teen movie, but he’s got me so pissed I can’t help myself.  The words continue to fall in all their cringe-worthy glory. “That’s it?  You didn’t give a shit, right?  You’d have let those bastards use and abuse me right there? Rook wanted to fuck me with a pair of pliers.  Did you know that?”  The tic of his eye and the clench of his jaw tell me I’ve hit a nerve, and still my mouth won’t quit.  “Is that what gets you off, Ripley?  Are you such a sadistic bastard, so goddamn hell-bent on pain you’d have let that happen?”
His brows come together at the same time he grips my jaw, and for the first time in the last hour, I see something flicker across his face—pain, anger, I can’t tell, but it’s better than the stoic expression he’s been wearing.  “I’ve killed him a million times in my mind for touching you, Dylan. You’re having trouble showing gratitude?  I’m having a fuck of a time playing the good guy here.  I don’t save people, sweetheart.  I kill them.  In brutally violent ways, but last night …” His lips form a hard line, brows stern. “I would’ve taken every bruise they put on your body.  Every punch for you. Only for you.  Seeing you laid out like that flipped my fucking switch, and I lost control.”

What can I say about this episode that I haven’t already said about the first three? The writing for all four parts was top notch. The pacing was incredible. The sex scenes were smokin’ hot. Rip and Dylan were complex and well-developed characters. It had twist and turns. Murder and mayhem. Death and destruction and so much more.

Secrets are revealed in this episode. Revenge is handed out. You’ll feel happy about the way things are ended, but I can’t help feeling there is more story yet to be told. One can only hope so! Two HUGE thumbs up for the entire series from your truly.

The Hawks By SD Hendrickson

Title: Never Hold Back (First Responders #2) Author: J.A. Essen Genre: Contemporary Romance Release Date: November 16, 2016 Synopsis Loss. We all have to live through it. We all have to figure out how to move past it and continue …READ MORE

RELEASE BLITZ & REVIEW — One Night By KL Kreig, part of the Drawn To Him Collection

Drawn to Him Collection is LIVE! ONLY 99c!     ~PURCHASE~ Amazon: http://amzn.to/2y3k4Yt iTunes: http://bit.ly/DrawntoHim Nook: http://bit.ly/2uGZYVA Kobo: http://bit.ly/2tELRLt     ~SYNOPSIS~ There are some men who make you helpless. You know the kind. They steal the breath from …READ MORE

♦ ♦ ♦ ♦ ♦ ♦ The day her mother passed away, Beulah was left with one name. That was it. No other explanation. Portia Van Allan was not someone Beulah could believe her mother ...READ MORE

I am thrilled to be sharing the amazing cover for Diane Alberts’ upcoming sexy new contemporary romance title, ROMANCING THE BACHELOR!! Everyone loves a swoon-worthy billionaire, and this cover is gorgeous! I‘ve got all of ...READ MORE