Warning: Creating default object from empty value in /customers/b/5/9/recinella.dk/httpd.www/betweenthebookends/wp-content/plugins/ultimate-widgets-light/assets/admin/redux-core/inc/class.redux_filesystem.php on line 29 RELEASE BLITZ & REVIEW — She Asked For It By Willow Winters – Between The Bookends
Latest News

Title: She Asked For It
Author: Willow Winters
Genre: Romantic Suspense
Release Date: January 23, 2018
~SYNOPSIS~
DON’T JUDGE A BOOK BY ITS COVER.
You’ll tell me you don’t… but you already think you know what my story’s about.

You have no idea.
Just like the people sitting in this courtroom.
She asked for it.  That’s what they keep saying.

And no, it’s not because my skirt was too short or I was drunk at a party.
It’s nothing like that.  It’s because of what I like and how I like it.

They’re judging me as I sit in the front row, my eyes drawn to the man on trial.
If I’d known it was going to end like this, I never would have gone home with him.
But he’s the type of man I just can’t say no to.

I wanted to feel his lips kiss down my neck.
I dreamed of running my fingers along the rough stubble on his jaw.
I craved his hands on me, pinning me down.
I needed to whisper his name in the dark, late at night.

You still think you know what happened? You don’t.
He’s innocent and I enjoyed every second I was with him.

Let me tell you my story … all about how I asked for it.
ADD TO GOODREADS

Willow Winters is so happy to be a USA Today, Wall Street Journal and #1 Contemporary Bestselling Romance Author. She likes her action hot and her bad boys hotter. She certainly doesn’t hold back on either one in her writing!

Willow started writing after having her little girl, Evie, December 2015. All during her pregnancy with Evie she continued to read and she only wanted to read romance. She was reading a book a day — sometimes two.

In January 2016 Willow was staying up late with Evie and just thinking of all these stories. They came to her constantly so she finally sat down and just started writing. She always wanted to do it so she figured, why not? Today Willow cannot be happier for making that decision! 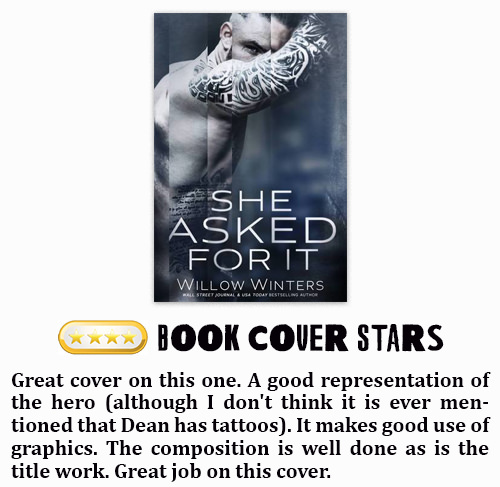 So to be honest from the get go this author can be a little hit or miss for me. Sometimes I find her book uber angsty and all over the place and other times they just CLICK and I find myself blown away by the story. This one fell firmly in the BLOWN AWAY category. I genuinely loved every word, every paragraph, every page, every chapter of this story.

On to the details…I found this one to be well written. The pace was perfect and my attention never wandered nor did I feel the need to skim. The plot was super engaging and had me turning the pages like a crazy woman. The mystery aspect was very well done. In fact, I thought I had this one figured out, turns out I DID NOT. ‘Nuff said about that. The angst level in this one was fairly low and there was no OW/OM drama. Neither character were virgins and in fact, one thing I loved about the heroine was that she owned her sexuality. The sex scenes were both hot and plentiful. There was a smallish cast of secondary characters. I know one, in particular, is getting his own book (next I think) and I wouldn’t mind seeing a female character that was introduced get a book of her own as well. In any case, they all added a nice extra layer of depth to the story.

Both the main characters in this one were extremely likable. Dean had that sexy asshole thing down to an art form but at the same time when it came to Allie, he had a sweetness and vulnerability that made you want to wrap him up in your arms. He was pretty much all in from the moment he met Allie. I also adored Allie. Like I mentioned above, she owned her sexuality. She liked what she liked, and she acted however she wanted to. I will say I wished she had opened herself up earlier to Dean, but I also understood why she didn’t. Last, it was all wrapped up in a good HFN (not great) ending <– I seem to say that a lot lately (lol). I would have liked to have seen a farther into the future look at this couple. But perhaps we will see them again in the next book. That being said, even with those TINY issues I still thought this was a damn fine read and therefore it gets two HUGE thumbs up.

★ ★ ★ ★ ★ ★ I fled here to start over, reinvent myself. Running has its perks. I learned that when I met and fell for him then when it all fell I apart, I ran again. I thought …READ MORE

~SYNOPSIS~ Six men with no memories of the past One leader with no hope for the future A man without a past Jax woke up in a lab, his memories erased, and his mind reprogrammed to serve a …READ MORE