That’s what Beauty Influencer Lizzie Danvers tells her YouTube subscribers after getting dumped on Instagram. Lizzie may have the devil’s luck in choosing men, but she’s determined to prove that the age-old “once a playboy, always a playboy” theory is bulletproof. All she needs is thirty days and one sexy commitment phobe to do it…

By day, Gage Harvey helps his twin at Inked on Bourbon, tattooing butterflies onto every female under the age of thirty. By night, he works for New Orleans’ Special Operatives Division, fulfilling a family legacy to protect his city. Relationships aren’t on his radar–until the hot-as-hell woman on his tattoo table glances up at him, a butterfly half-inked on her ass, and propositions him.

Gage should say no–nothing good ever comes from entertaining crazy women. But for the sake of playboys everywhere, he’ll take one for the team, and prove to Miss Lizzie Danvers that bad boys are the only men who will tempt you with forever.
ADD TO GOODREADS

Damn.That was the first thought to pop into Gage’s head when he spotted Lizzie strutting toward his old Chevy truck in Winn Dixie’s parking lot.

Well, damn, and also, how does she make sweats look so good?

Her hair shone caramel under the sun, and it was with a small dose of satisfaction that he watched her stumble, slow, and then stutter to a halt at the sight of him up against his truck.

“You all good?” he asked, not bothering to hide the once over he gave her. V-neck T-shirt; tight leggings that hugged her body in all the right places; PJ’s coffee cup clutched tight in one hand; a pair of pristine, white tennis shoes. He met her gaze. “Not used to walking without the weapons?”

“Weapons?” Her husky voice slid through him like a shot of bourbon. “I’m in the market of advertising eye shadows and false lashes, Gage, not shotguns.”

“Your shoes, Princess.” He met her gaze, swallowing a grin when a flush worked up her neck. “I was talking about those fuck-me heels you’ve worn each time I’ve seen you.”

As he was beginning to expect from her, her chin went up in defiance. “The shoes weren’t for you.”

“Yeah?” He made a show of looking around her to where her near-fall had gone down. “What’s your classification between a rock and a pebble?”

Blue eyes narrowed. “I’d offer you a sip of my coffee to fix that grumpy attitude of yours, but since you’re inhuman and all . . .”

Gage pushed away from the truck. One step toward her. Two steps. Her chest inflated with a sharp inhale when he wrapped one hand around the Styrofoam cup. With a quick tug, he pulled it from her grasp and brought the rim to his mouth, drawing out the moment.

At her deadpan tone, he replied, “I would,” and then took a purposeful swallow of death itself.

Jesus. Coffee. And it was black, too. Not a single touch of cream or sugar to mitigate the bitterness.

It took everything in him not to cough and thump his chest, and he made do with returning the cup to her still waiting hand.

As though enjoying his misery, Lizzie took a long sip of the coffee, never taking her eyes off his face. Then, “Feel a lot manlier after that display of cavemanitis?”

It was seven-thirty in the morning, and the fire was already in her step. He should have downed the rest of her drink. She definitely didn’t need any more of a perk-me-up. “I think I liked you better in the heels,” he muttered, turning back for the truck.

“Because they make my legs look longer?”

He grasped the passenger’s side door handle, and drew it open for her. When she went to climb in, Gage put his hand to her back. “No, Princess, because you’re a hell of a lot less snarky when you’re an extra five inches taller. Might be the difference in oxygen levels.”

Her mouth parted in a surprised O just before he slammed the door shut.

Maria Luis is the author of sexy contemporary romances, though she may or may not have a few historical romances hiding in the cobwebs of her computer.
​
When she’s not writing about strong men and the sassy women who sweep them off their feet, Maria is a historian who specializes in medieval England and 19th century New Orleans. What do the two eras have in common, you ask? Not much, except for disease, scandalous activities and crime–Maria’s favorite topics.
​
Maria lives in New Orleans with her better half, where she can generally be found hiking with her two dogs, Zeus and Athena, kayaking in Louisiana’s inter-coastal waterways, or curled up on the couch with a good book.
~AUTHOR LINKS~
WEBSITE
FACEBOOK
FACEBOOK GROUP
INSTAGRAM
GOODREADS
AMAZON 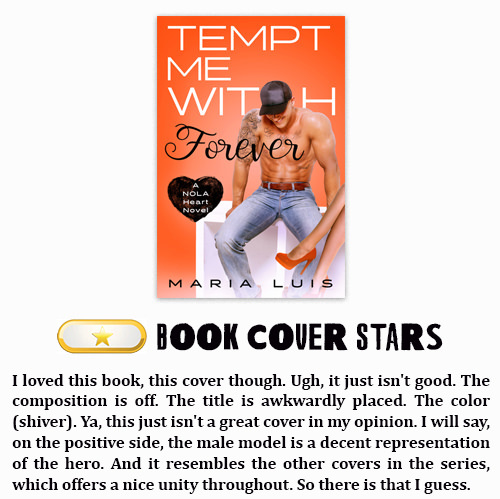 This was a cute book. You know the type…easy to read…puts a smile on your face…that was this book to a “T.” It was also well written and well paced. I loved the setting. The plot was engaging and kept me turning the pages. I hadn’t read any of the other books in this series and had no problem following along. So I can safely say this can be read perfectly fine as a standalone. I didn’t find it particularly angsty. There wasn’t any OW/OM drama. It was a bit of a slow burn, but the sex scenes were hot. The secondary characters were interesting (mostly consisting of the couples from previous books) and Gage’s brother (whose book it would appear is up next).

I adored Lizzie. She was sweet. She was sassy. She was funny. She was kind-hearted. She wore her heart on her sleeve. It is no secret that I am super picky about my heroines, and I loved Lizzie WAY more than Gage in this one. Gage…what can I say? I DID actually like him for the most part. He was sexy. He could be charming at times. That said, I did find his arrogance and his THIS IS JUST SEX attitude which lasts right up until the end of the book annoying at times. And even though what he did at the end was sweet (and funny) he still didn’t do enough groveling.Lastly, it was all wrapped up in an eight months in the future epilogue which was cute and set the scene for Owen’s upcoming book. So all in all this one was a light and enjoyable read and therefore gets a solid two thumbs up from yours truly.

⚙⚙⚙ Jesse Winthrope is a self-made millionaire who has quickly risen from his own humble beginnings. Rocketed high into the upper echelons after the invention of his high efficiency Winthrope Steam Engine, Jesse is poised to take on the Western …READ MORE