Re-released in a second edition with two new chapters and additional new content.

Rachel Swift is a woman on the run.

A stalker sent Rachel’s world reeling. Now she’s running for her life, and Bliss, CO, seems like the perfect place to hide. Bliss is a strange little town, filled with artists, nudists, and the occasional conspiracy nut. It’s a good place to start over.

Max and Rye are just the men to catch her.

Horse trainer Max and Sheriff Rye gave up on their dream of finding one perfect woman to share long ago. Rachel walks in, and they’re both in love and fighting their true natures.

When Rachel’s past catches up with her, all of Bliss is in danger. Rachel knows she should run, but how can she leave behind the love she’s found with Max and Rye and the home she’s built in Bliss? With her whole town behind her, Rachel is ready to make her stand. It’s time for her to get back in the saddle and ride.

Max’s hands slid down to cup his girlfriend’s perfect cheeks. He pulled her close and didn’t try to disguise the erection he was sporting. It had been days since he’d gotten inside her. It was starting to make him crazy.

“Hello, gorgeous,” he breathed as he leaned down to slant his mouth across hers.

Rachel softened against him and wrapped her arms around his neck. She didn’t protest as his tongue swept in to play with hers. He hauled her up so her feet were dangling. It was the only way to get her pussy where he wanted it. He rubbed himself against her. He knew it made him a caveman, but he wanted to mark her as his. He wanted her to get a tattoo on that perfect ass of hers that read Property of the Harper Brothers.

Max set her down. His brain went there all the time now. He couldn’t stop thinking about Rachel between him and Rye. “What’s for breakfast?”

“Pancakes and sausage,” she replied with a suspicious gleam in her eyes.

He kissed her forehead gently and went to sit down at the kitchen table. He was very careful since she was studying him like she was trying to guess what he would do next. He didn’t want her to figure out what he was thinking. He had more than one thing he needed to hide from her today. He schooled his features to express nothing but innocence.

“Oh, God, what are you thinking?” Rachel looked utterly horrified. “Who are you going to kill?”

“What?” Max asked, holding his hands up in confusion.

She rounded the table and leaned over. He couldn’t help but notice she wasn’t wearing a bra. If he leaned in a bit, he could see the curve of her breasts and the faintest hint of nipple.

“Eyes up, mister,” she ordered in what he’d come to think of as her “drill sergeant” voice. His eyes obediently came up. He’d learned when it was in his best interests to obey her immediately. His baby was one tough cookie, and he was man enough to admit he needed her to be that way. He would walk all over her otherwise. That would make for one boring relationship. Rachel kept him on his toes.

She rolled her eyes and sighed. Her arms went around his neck. “You just had surgery. You haven’t even had the stitches out yet. The doctor said we should wait a few days.”

She grinned. It did strange things to his heart. “That sounds tempting. I’ll call the doctor today, and I’ll see if we can get him to let you off the leash.”

She kissed his cheek. She got up and went to the stove, where she poured out pancake batter. Max relaxed.

She rounded on him suddenly. “You’re sure you’re not planning something terrible?”

She knew him far too well. He grimaced inwardly. This was where Rye would come in handy. Rye could distract her. Rachel was far too much woman for one man. He needed his brother because Max had figured out that a tag team approach was required when Rachel got saucy. But he was all on his own now. He didn’t like the feeling.

“Baby, I’m planning on doing some light work around the barn. I’m going to spend some time with Sunflower, and then I’ll have Rye drive me into Del Norte for my checkup. That’s my plan.” It was true. It was part of his plan. He didn’t mention the stop he intended to make.

Her eyes narrowed, and he wondered briefly if she could make that spatula into a weapon. He thought she probably could. Max sighed. He could make it into one, too. He could pull her over his lap and shove those boxers off her hips, then spank that pert rear. He wouldn’t hurt her. He’d simply get her bottom all pink and pretty. He’d rather use his hand, though.

“You have crazy eyes today, Max. What did you just think?” she asked breathlessly.

Rye stood in the doorway. He had on jeans and a T-shirt. His hair was still wet from his shower. “He was wondering how you would handle it if he pulled you across his lap and spanked you with your spatula. You should use your hand, Max. It would be better.”

Rachel’s mouth fell open. She looked between the two of them like she was trying to figure out what to say.

Rye shrugged. “He was thinking it.”

Rye’s face fell. Max saw him look down at the crotch of his jeans. “Damn it.”

Rye turned and walked back down the hall. Max knew exactly where he was going.

“What’s wrong with him?” She looked concerned as his brother marched off.

Max smiled broadly. Rye had done his job. She wasn’t thinking about his potential plans anymore. She set a plate in front of him.

His brother was hungry, all right. He’d been hungry since the minute he laid eyes on Rachel.

Oddly enough, I did not enjoy this one upon rereading as much as I did when I first read is AGES ago. This time around I found it frustrating that Rye isn’t included in Max’s and Rachel’s relationship until 80% into the book. I guess nowadays I prefer my menages to start on equal footing and not with two people already dating, having sex, and in love, while the third sits on the outside looking on in sadness <— slightly dramatic, but that is kind of how it felt for me (shrug). 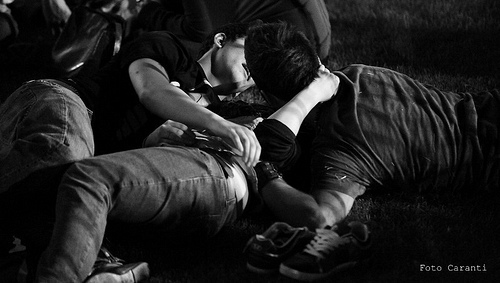 That said, I still enjoyed the book overall. It was full of humor. It was well written. The plot was engaging. I adore the town of BLISS and all its quirky and intriguing characters. I loved all three main characters (especially Max). The sex scenes were hot. I loved the small mention of Alex. I didn’t find it particularly angsty, and there was just a little OW or OM drama. So yea, I enjoyed it, and I am looking forward to rereading the next book. Therefore yours truly is going to give this one two thumbs up.

RELEASE BLITZ — Hunted For The Holidays By Amber Bardan

Amazon  INCLUDES FREE HOLIDAY EBOOK CAUGHT FOR THE HOLIDAYS It should have been an innocent vacation with my family. But wild and dangerous things lurk in this forest. A wild and dangerous man. Stalking me. Hunting me. Terrifying me—because all …READ MORE

#TEASER — All There Is By Violet Duke

When Ellis Earnshaw and Heathan James met as children, they couldn’t have been more different. Ellis was loud and beautiful – all blond hair, bright laughs and smiles. Heathan was dark and brooding, and obsessed ...READ MORE