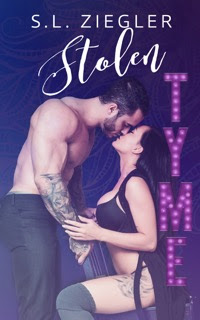 Time doesn’t heal. Time hurts. Makes you stronger, rougher, And smarter. Now that I’m back, Xavier Scott can’t hurt me again, Won’t hurt me. I’ve seen my share of pain, Felt it, Owned it, And released it. After one look, One touch, One tremble, And I’m that broken naive girl again. I want him, My body aches for him, My soul needs him. But, my head will be damned to fall for that again, Fall for X. He stole my heart before, but not this tyme.

Taking a deep breath, I open the door. I pop open my mouth, only to close it just as fast. My vision goes to Naomi’s face, with her stage makeup caked on, but her hair down, falling over her shoulders. In waves. Begging me to wrap my hand around it.

But that’s not what does me in.

Not even in the slightest.

Naomi is in a bra and panties.

Black lace bra and see through panties at that.

I’m in heaven—I’m in holy hell.

“Oh lord, X, I thought you were Penny.” She’s breathless, but makes zero attempt to cover herself up.

Lord, strike me dead or help a brother out. Because either way, I’m fucked.

I drop the flowers over the bulge in my pants and gather strength to speak without my voice cracking like a twelve-year-old boy. “Do you open the door like that to everyone?”

“What if I did?” She props her hands on hips, and each time her chest moves, the piercings in her nipples catch the light like a fire—a fire that is spreading over me.

“I would say I need to knock on your door more often.”

Every single goddamn day. Every damn hour. Every damn minute. Naomi is my damn angel standing right in front of me.

“I think you knocked on my door two times too many. Where’s Charlie?”

“The hovering was driving her nuts, so she called Hadley for a sleepover.”

She raises her brow, but a grin plays on her lips. Naomi’s happy I’m here. “Why are you here?”

Clearing my throat over the emotions trying to get out, I take a stab at a conversation. “I wanted to give you these and tell you I enjoyed the show.”

Naomi eyes the flowers, the grin turning into a smirk. “Why are you really here?”

Swallowing deeply, I feel my Adam’s apple bob in my throat. “To see if you wanted to go on a date with me.”

A date. A real one where I don’t have to hide her from anyone or keep her a secret. A date that’s seven years too late.

I’m so fucking addicted to her, all that she does, the way she moves.

“Because I want to?” It comes out as a question, only I didn’t want it to.

“Xavier, we’ve tried to make this into something it clearly wasn’t. Why would we try to do that again?”

I take a step closer to her. “It’s not clear from my side. I think about you all the time.”

“You think about what’s between my legs, nothing more.”

I stare into her dark brown eyes, and with every breath she takes, I know her words are just a shield she’s using to protect herself. “It’s much more than that…so much more. I think about your tits, your moans, your screams. Don’t get me wrong, the sex is good.”

Another inch closer to her, and her chest moves rapidly.

“Fucking eye rolling, teeth clenching, earth splitting in two, fantastic. But that’s not the only thing I want. I want you. Your brain, the conversations. You. It’s you. That help your pride any?”

“Can I tell you something?”

“I want you. In more ways than I can count.” Another step closer, I now tower over her.

S L is a self-described book junkie. She spent her whole life with her head in the clouds, dreaming of characters and imagining how their stories will play out. It wasn’t till later when those stories in her head became too much to handle and made it onto paper. When SL isn’t reading or writing, she is spending her time with her two crazy kids and husband. Where they reside in a home just outside of Atlanta. SL is true buckeye fan and lives for the weekends where she can drink a glass of wine and devour the books waiting on her Kindle.
FOLLOW S.L. ZIEGLER
AMAZON / GOODREADS / FACEBOOK / TWITTER
About Eve1972 3973 Articles
Hi there! I’m a mom and wife by day (and night), aspiring writer (in my dreams), and an avid reader (every day of the week). This is my little corner of the web to post about ALL things books. I live in Copenhagen, but I am a Canadian girl (born and raised) at heart.

*** Here’s a tip: never trust a jackass in preppy clothing. The phrase “trust me” should have been my first clue to hightail it out the door, but hindsight is always 20/20. So there I was, on a stage with …READ MORE