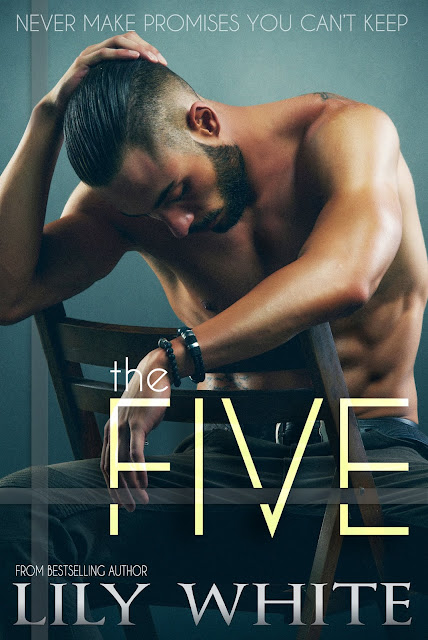 ~SYNOPSIS~
Twenty-two year old, Rainey Day, is the sole survivor of a grisly murder.
Hired to question Rainey regarding the attack, psychologist, Justin Redding, interviews her over the course of several days. What he learns tests every professional boundary he has.
A twisted story of sex, drugs, manipulation and murder, Rainey leads Justin down a path of promiscuity, heartache and a life unlike anything he’s known. While Rainey describes the grueling details of the events leading to her friends’ murders, she seduces him into her world, testing his patience and willpower.
Death clings to Rainey.
It’s a puzzle Justin is determined to solve.
But will Justin be able to resist Rainey’s charms while figuring out the secret of The Five?

~READ AN EXCERPT~
“It a long story. I don’t even know where to start.”A bead of sweat slid down her neck from her hairline to pool in the hollow of her throat. It drew the eye lower, my gaze wandering to places that were unprofessional. Flicking my eyes up, I caught her stare, she knew. Her eyes softened, her lips pulling apart on a ghost of a smile. I cleared my throat embarrassed for having been caught. This woman would be a handful for any man. Perhaps I’d been wrong to immediately assume she was a victim. I wondered if the detectives had the same problem, if they’d called me in because they couldn’t keep their attention from wandering to forbidden places. She blew out a puff of smoke, a small ring floating up to the ceiling above her.“The beginning is a good place,” I prodded, my voice gritty. “How did you end up at the party? How long did you know your friends?”She was shutting down more, her body curling over itself. Abandoning the cigarette into the cup, Rainey refused to meet my eyes. “I’m not sure they were my friends.” Rather than filling in the empty space, I stayed quiet, allowed her to process her thoughts. A cryptic smile curled her lips when she glanced up at me again. “The beginning was the day I moved into the neighborhood with my mom. It all started then, I think.”“Where’s your mom now?”“Dead,” she answered without a flicker of remorse.“You have a lot of dead people around you, Rainey.”“We all die, just some of us sooner than others.”The statement was odd and I wanted to explore it. It would have to wait. For now, I was willing to take whatever she would give me. Movement caught my eye; she was touching the mark beneath her elbow again. Her fingers moved over it and I had a clear view of five tally marks as if she were counting something. Why five? What was so important she would carve the count into her skin? “Then let’s start there.”Another smile. “I should warn you, Doc, I’m a bit of a slut. This story-“ Her eyes closed, opened. “This story doesn’t paint me in a pretty light. Not like all of the good girls I assume you’re used to dating.”Despite the condemnation, she wasn’t upset to make the confession. It was a simple statement as a prelude to her tale.“I’m not here to judge you, Rainey. Just tell me what happened.”Lighting another cigarette, she drew in a deep drag, blew it out, her gaze distant as she began to talk.

~MEET THE AUTHOR~
Lily White is a romance writer who likes to dabble on the taboo side of eroticism. She is most known for her Masters Series, Target This, Wishing Well, and Asylum. In addition to dark romance Lily writes contemporary romance, taboo romance, and psychological thrillers. Lily enjoys stretching her writing muscles by continuing to challenge herself with each book she publishes.

SYNOPSIS Sometimes it feels so damn good to be bad Photographer Wyatt Royce’s career is on the verge of exploding. All he needs is one perfect model to be the centerpiece of his sexy, controversial show. Find her, …READ MORE

RELEASE BLITZ — A Quarter to Twelve By Josephine Traynor

Carrie Ann Ryan’s FRACTURED SILENCE is available now! Get your hands on Parker, Brandon, and Avery’s story today – you definitely don’t want to miss this next book in the Talon Pack series! It’s war ...READ MORE