Warning: Creating default object from empty value in /customers/b/5/9/recinella.dk/httpd.www/betweenthebookends/wp-content/plugins/ultimate-widgets-light/assets/admin/redux-core/inc/class.redux_filesystem.php on line 29 When We Kiss By Tia Louise – Between The Bookends
Latest News

He’s a hot cop with a square jaw, a sexy grin, and a tight end.
I’m a bad girl, a “Jezebel”—just ask all the old biddies in town.
We’re oil and vinegar. We don’t mix.
But when we kiss…
All bets are off.

She’s got flashing green eyes, red-velvet lips, and luscious curves in all the right places.
She’s a bad girl all right, and after what I’ve lost, I’m not looking for trouble.
But when we kiss…
Oil and vinegar DO mix,
And when they do... it’s electric.

When We Kiss is a full-length, STAND-ALONE, opposites-attract romance about heroes, bad girls, and what happens when you stop fighting and surrender to love. 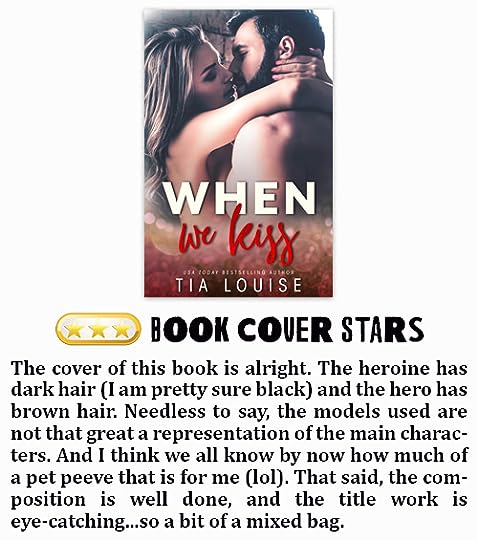 ~WRITING – PLOT – PACE~
This book was just so damn sweet. I adored (almost) every little thing about it. It was well written. It was well paced, and I was never bored or felt the need to skim. The plot was entertaining. It was humorous. It was sweet. It was sexy. Last, it was all wrapped up in a lovely little bow of an epilogue.

~HERO~
CHAD…What can I say about Chad? He was pretty much a perfect book boyfriend. An ex-military man turned small town cop. He was sexy as f-ck. He was sweet but knew when to be a bad boy. He had the patience of a saint, and he was all about Tabby. What more could you ask for?

~HEROINE~
TABBY…I probably would have given this book 5-Stars if it hadn’t been for Tabby. For the most part, I liked her character a lot. She was feisty. She was sassy. She was funny. She was a good friend. That said, she just kind of grated on my nerves a wee bit when it came to some of her interactions with Chad, and how every time her Uncle said anything to her she overreacted. It was just a tiny niggle though and didn’t affect the way I felt about the story overall. 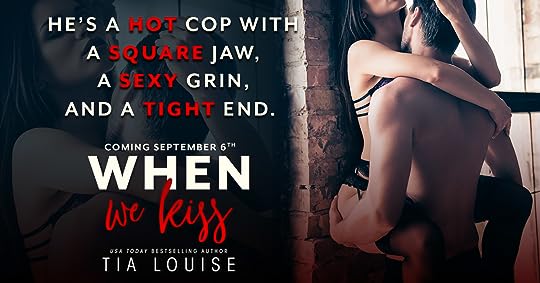 ~SECONDARY CHARACTERS~
This book had SO many excellent secondary characters. I really want to read more about Emberly and Coco. I guess this book takes place before her and Jackson’s book WHEN WE TOUCH since she is all on her own in this one. I also got a kick out of Jimmy (a bad boy in the making?), and I would love to hear more about André. I even felt a bit sorry for Daisy (although as a heroine might be a hard sell unless she didn’t actually sleep with Tabby’s ex).

~HEAT LEVEL~
High. There were quite a few sex scenes in this one and they were suitable smokin’. Nothing too kinky though, just handcuffs.

~ANGST LEVEL – SEXUAL HISTORIES~
LOW. This wasn’t a particularly angsty read. The couple had a few ups and downs, but nothing over the top. Like I mentioned above, it was a pretty sweet and easy peasy type of read. Somewhat insta (although they meet and don’t start dating until a year passes). Neither were virgins (thank god). There really wasn’t much mention of the hero’s sexual past. He didn’t come off like a manwhore, nor was it mentioned if he had slept with any other women in the year between meeting the heroine and starting to date her. It was MY impression that he hadn’t since he mentions he was taking the time to get his life together. Same goes for the heroine. There wasn’t any OW or OM drama either.

~IN THE END~
Did I enjoy it? YES!
Was it perfect? Pretty damn close.
Would I recommend it? Yes.
What type of readers would enjoy this book? I think this one would perfect for those that like their romances sweet and drama free. As well as those that like their heroes charming and their heroines sassy.
This one gets two HUGE thumbs up from yours truly.

Today we have the release day blitz for My Kinda Song by Lacey Black! Check out the festivities and be sure to grab your copy today! Title: My Kinda Song Series: Summer Sisters book 3 Author: Lacey Black Photographer & …READ MORE

Dating-ish, an all new standalone from the USA Today bestselling Knitting in the City romantic comedy series by Penny Reid is now LIVE!   SYNOPSIS ‘Dating-ish’ can be read as a standalone, is a full ...READ MORE

COVER REVEAL — She Was Mine By Marie Skye

Title: She Was Mine  Author: Marie Skye  Genre: Romance          GraysonIf I had to use one word to describe my wife, it would be Mine. Emmalin is my life, my love, and ...READ MORE